“As the Petals” by Lazell, 1916 (Inspired by Loïe Fuller and Isadora Duncan) Photos by Theadora Brack 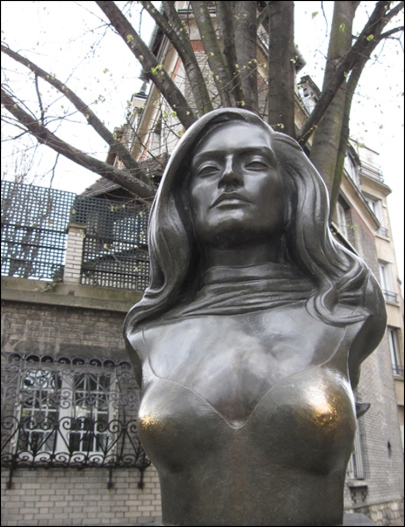 Celebrating the upcoming rhythmic gymnastics at the 2012 Summer Olympic Games, here is a dance-related walking tour in Paris, with just a dash of  gossip for fun. Cendrillon, grab your slippers, veils, and tutus because this week we’re headed to a fête with a twist in the Cimetière de Montmartre. Follow my lead!

On May 3, 1987, Yolanda Gigliotti, better known as pop idol Dalida (the female Elvis of France), took a handful of pills, put on her sunglasses and “left our world for another,” as the official fan website puts it. Try listening to her catchy “Itsy Bitsy Petit Bikini” song without dancing, singing along, and then hitting repeat. I’ve tried but no can do.

In addition to her grave, Dalida’s house is located at the end of rue d’Orchampt, while her bust is at the tip of rues Girardon and Abreuvoir in Montmartre. Pilgrims still visit all three shrines. Katy Perry’s fireworks got nothing on you, Dalida!

Famed terpsichorean Louise Weber, a.k.a. La Goulue (the Glutton) was Queen of the Can Can and a favorite muse of Henri de Toulouse-Lautrec. She earned her moniker for nipping drinks from her audience while distracting them with her pantaloons and little pet goat. “When I see my behind in these paintings, I find it beautiful!” she once quipped.

Dancers from all over the world leave their ballet slippers at Marie Taglioni’s Shrine,  Cimetière de Montmartre

Dance master for Louis XVI, Gaétan Vestris was first to drop the mask during performances, and rely on expressive good looks alone. Vanity-inspired innovation, perhaps?  “There are but three great men in Europe—the king of Prussia, Voltaire and I,” was his favorite boast.

Fast forward: His son Auguste Vestris held court at the Paris Opera for decades, where he busted a sissonne (flying) move and made the people-pleasing gavotte his own. Even dancing queen Marie Antoinette was a fan!

Marie Taglioni’s appearance in her father’s “La Sylphide” marked the arrival of the Romantics. Though she wasn’t the first to dance en pointe or don the muslin skirt (skimming the ankle much to the delight of every binocular-carrying fan!), she’s the one who made it her own. “Shorten your dress just a  little,” begged one admirer, according to a newspaper report in 1884.

Taglioni’s popularity launched her name into the lingo: the verb Taglioniser (to be slender and graceful). And most coveted coiffeur? À la syphide!

Though limelight stage lighting had the advantage of being a lot brighter than oil, it still wasn’t hazard-free. Taglioni protégé Emma Livry refused to soak her gauzy costume in fire-proofing because she abhorred the discoloring and feared it would weigh her down, but then tripped over a light, and set herself on fire. And now here she is!

Courtier Paul Poiret (Le Magnifique) not only draped favorite client Isadora Duncan in diaphanous chitons made of Dijon-colored chiffon, but also performed with her at his infamous Ballets Russes-inspired tented backyard shindigs. 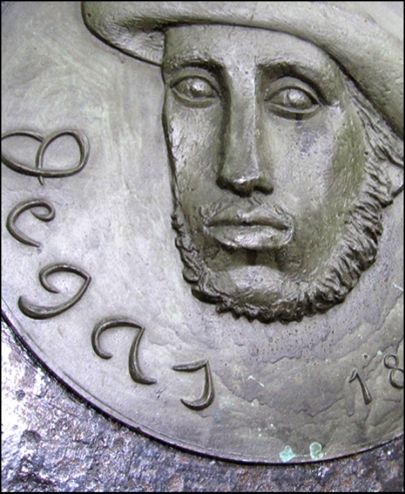 “Our children would be dancing geniuses,” Isadora Duncan mused to Ballets Russes Vaslav Nijinsky by way of a marriage proposal. Unfortunately, he turned her down, because—rumor has it—he didn’t want his children dancing like her! When asked the secret to his airy, floating leaps, Nijinsky would say only, “You have just to go up and then pause a little up there.”

“The dancer is an excuse to paint pretty fabric and depict movement,” wrote Edgar Degas, who painted his beloved petits rats (ballerinas in training) for nearly fifty years. “People call me the painter of dancers, but I really wish to capture movement itself.”

Dig Degas? Don’t leave Paris without a spin around the Musée d’Orsay. After touring the cemetery, hop on the “95” bus. You’ll find the bus stop on rue Damrémont, just around the corner from Dalida’s Bambino studio at 10 Rue Damrémont and Toulouse-Lautrec’s atelier at 7 rue Tourlaque.

Keep on dancing and a-prancing!