I’m always on the prowl for shopping nooks in Paris. For the love of precious time, I hate making the trek for just one boutique. I’m no diva, but I do like to shop-hop without a lot of hassle.

Here’s the scoop: In Paris, there are shopping zones where you can buy anything, as well as scattered districts where clusters of stores carry similar items. For your browsing pleasure, I’ve updated my Paris shopping guide. So grab a handy-dandy ballpoint pen! Got questions? Ask away!

Also at the Clignancourt Flea, you’ll find La librairie de l’Avenue. It’s a large but still intimate bookshop, stocked with new and used art books, catalogues, vintage prints and antique magazines. After hunting at the Porte de Vanves Flea, hoof it to the book and prints flea market. Located at intersection of Rue Brancion and Rue Fizeau in the 15th arrondissement, the market is open Saturdays and Sundays. 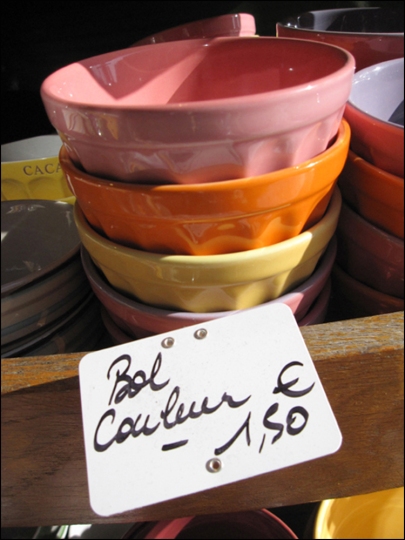 WWJCD? (What would Julia Child do?) That joke never gets old. For gastromical sakes, she’d hunt the aisles of kitchen-equipment specialist E. Dehillerin. “Thunderstruck!” was her description of the heated encounter she first had there. Located at 18 Rue Coquillière (Métro: Les Halles), the centuries-old shop’s shine has not dulled the least bit. Also, check out Julia’s photograph behind the cash register!

When it comes to dinner parties, presentation is everything! So channel your inner Martha Stewart, and roll on over to shops along rue de Paradis (south of Métro Poissoniere, 10th arrondissement.

Tip: While at the Porte de Vanves Flea Market, keep your eyes peeled for classic crème brûlée ramekins, café au lait bowls, and escargot tongs, along with the dimpled metal pans you cook the snails in. Quiché and soufflé dishes also rise to the top here. Don’t let minor chips and scratches keep you at bay. I firmly believe that yesteryear’s wear-n-tear adds value. “Everything has a history,” as Julia would say!

At the foot of Sacré Coeur in Montmartre (Métro Abbesses or Anvers) is where I hunt for fabric and notions. I’d kick off the quest on Rue d’Orsel (north of Metro Anvers in the 18th). Flaunting four floors of textiles, notions and baubles, both the Marché Saint Pierre on 2 rue Charles Nodier, and the Tissus Reine at 5 Place Saint-Pierre (with its fifty fetching miniature mannequins!) are definitely worth a visit.

Tip: Looking for African Megawax cloth? I’d start the spree at Megawax on the corner of rue Polonceau and rue des Poissonniers. Then head up Poissonniers a few blocks and walk up and down rue Doudeauville, where you’ll find still more jam-packed cloth shops. I’ve bought cloth patterned with prints of umbrellas, chickens and eggcups, along with water bottles, mobile phones and factories. Look for the €10 piles of cloth!

I often find my bargain bin bliss at the Sympa shops on rue Steinkerque and along Boulevard de Rochechouart (Métro Abbesses or Anvers). Located at the foot of Sacré-Coeur in Montmartre, the stock is always cha-cha-changing. Look for Kookai, Jennyfer, and Naf-Naf, along with Pimkie, Printemps, and Sinéquanone. Also expect Best Mountain, Etam, and Undiz but at a fraction of their original cost. Don your elbow pads and eat a healthy Wheaties breakfast. Game on!

You’ll find stock shops (outlets) along rue d’Alésia.  Naf-Naf and Cacharel, along with Sonia Rykiel’s SR shop are all represented in the ’hood. But so far, after years of hunting, I’m sad to report that I’ve found not one keeper. Truth be bold, the discounted designer “seconds” are still out of my pocketbook range, while garb in the chains like Naf-Naf cost just slightly less than they do at the department stores. There. I’ve said it.

Looking to shake up your wardrobe with a little Zara, Etam or Naf-Naf? Here’s where I go-go for my Chains of Love: Boulevard Haussmann, rue de Rennes, and rue du Commerce, along with rue de Rivoli and Champs-Elysées. During the Big Sales in January and July, the Zara at 40 rue de Rennes in the Félix Potin building (an Art Nouveau masterpiece!) usually serves as one of “last stops” for the chain’s leftover clothing.

Rocking a fairy tale vibe, the skinny rue d’Orsel (Métro Abbesses) is lined with a row of clothing shops and studios. Their kitschy, candied-colored vitrines always stop me in my tracks. Located in the textile district, the artists here play with the full spectrum of fabrics like there’s no tomorrow. Check out: Zélia’s Sur la Terre Comme au Ciel, Marie’s Le Boudoir de Marie, and Kitty’s Killy Grind.

Throughout in Paris, you’ll find “friperies” (secondhand clothing shops) and “depôts-ventes” (consignment shops). I’d either hoof it to Abbesses (Métro Abbesses) or the Marais (Métro Saint-Paul). Both have deep pockets of vintage clothing shops. Le Caverne à Fripes at 25 rue Houdon in Abbesses or FREE’P’STAR at 61 rue de la Verrerie in the Marais are seek-a-boo-worthy!

Tip: Le Caverne’s inventory is eclectic, and may seem chaotic but don’t let looks fool you. The collection is quite organized. After a few minutes, you’ll recognize the system: shirts to the left and skirts on the right, while party dresses hang in the back and slacks are stacked in the middle.

If you’re looking for something specific, don’t hesitate to ask proprietor Patrick Lambert. Almost buried in amongst the clothing and camouflaged in vintage togs himself you’ll find him either chatting with neighbors or reading a novel as Broadway music plays on in the background. Here I recently scooped up yet another 1960s little black wiggle dress made in France. Cost? €10. Mad Men experience? Zipless.

For Heaven’s Sake, don’t forget to splurge a little because in the words of Oscar Wilde, “To love oneself is the beginning of a lifelong romance.”

Play on at Marie’s Le Boudoir de Marie in Abbesses 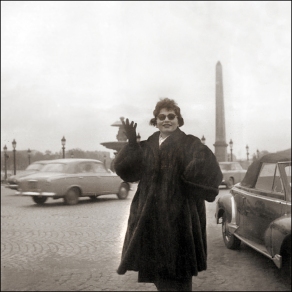