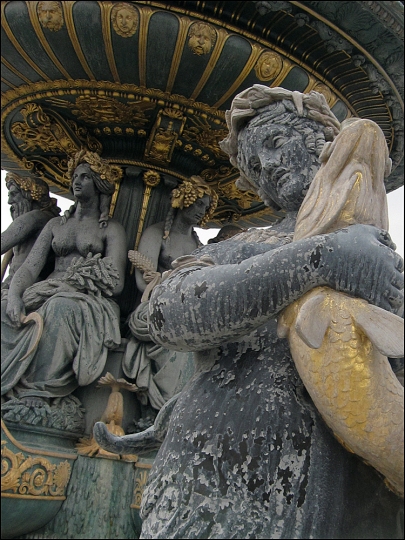 Dress at the Seaside

In these days when amateur photographers swarm everywhere and when the click of the indiscreet apparatus takes one by surprise, on the plain, in the valley, on the mountain, it is necessary, more than ever, for women of fashion to watch over their reputation for style. The bathing hour at the fashionable seaside resorts is, above all others, the most critical.

At that moment the Kodak rages.

It is well to make use of large waterproofed silk knickerbockers over everything, drawn in at the knees; in this manner the dress is kept dry up to the waist. To wear these costumes with comfort, it indispensable to have a waistband corset of strong linen, and very slightly stiffened, which supports the back and gives a curve to the loins.

Lastly, need we sacrifice our pretty waved hair, which forms an auricle round our features and a pleasing nimbus to which all eyes are accustomed? A fringe of curled hair will adapt itself to the interior of our selected harmony of the face. Nowadays, accessories are so numerous that it is really laziness on the part of the woman without a maid who is not bien coiffé!

(All this, according to The Paris Herald in 1901, “The Inevitable Kodak: How to Set off Charms that Nature Has Bestowed and Create Those Which She Has Refused”)

Trekking to Paris? The Musée de la Marine, located at place du Trocadéro is worth the expedition. Dive deep into my favorite French naval history museum’s vast collection of artifacts ranging from Napoleon’s gilded ceremonial barge (with all 24 oars still intact!), the Carmagnolle brothers’ diving suit (at 800 pounds, those brothers were heavy indeed), to toy boats that once belonged to the young Louis XV!

Tip: Stop by the gift shop. I’ve said it once, and I’ll say it again. Long and narrow like a ship’s salon, here you’ll find ocean liner posters, postcards, books, model ships, and striped shirts by designer Jean Paul Gaultier. Then, with a book in hand, head to the Jardins des Trocadéro, tucked behind the museum. Its hideaways are the perfect place for a rendezvous.

Covet nautical wear? Heck, who hasn’t been touched by the bold stripes of the traditional nautical shirts of Brittany? That coastal region is where the French-striped top originated.

Thank Gabrielle “Coco” Chanel for taking the French naval uniform to the streets in 1916, deftly improvising with fabric and color like a jazz musician. Off the hook, overnight silky loungewear caught fire—at the seaside and in the city, and soon beach pajamas followed suit.  “It is always better to be underdressed,” according to Coco. I agree.

This look not only touched appealingly rugged-types like Picasso, Hemingway, and Jean Paul Gaultier, but also lured Rykiel, Schiaparelli, Jean Seberg, Brigitte Bardot, and Audrey Hepburn—just to name a few. And it continues to captivate. Why, the very shirt (by Mark Cross) that Audrey herself wore on the set of the 1956 film “War and Peace” was recently put up for auction in London. Oh, was I tempted . . .

Speaking of temptation, a confession: I myself fell for the marinière after reading Hemingway’s “Garden of Eden.” Throughout the slim novelette, it crackles.

Here’s a nibble:
“Catherine sat was sitting at breakfast on the terrace. There was a red-and-white checkered cloth on the table. She wore her old Grau du Roi stripped shirt fresh-washed and shrunk now and much faded, new gray flannel slacks, and espadrilles.”

“She had bought the shirts for them and then had washed them in the basin in the room at the hotel to take the stiffness out of them. They were stiff and built for hard wear but the washings softened and now they were worn and softened enough that when he looked at the girl now her breasts showed beautifully against the worn cloth.”

Sigh! Inspired, let’s now hit the cobblestone rues, and earn some romantic stripes of our own, shall we? 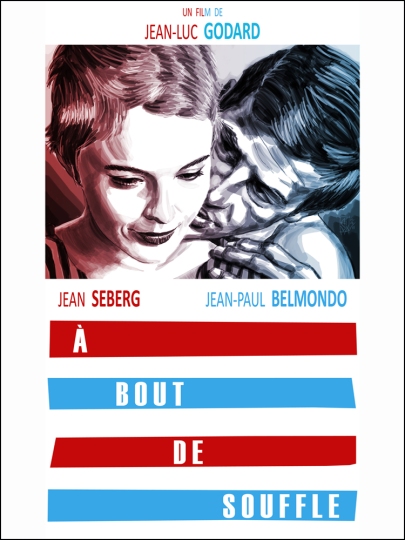 In the Marais, you’ll find beaucoup de Breton stripes. Kick-off your quest at the FREE’P’STAR at 61 rue de la Verrerie. Decked out in neon signs, funky lighting fixtures, and original photography and paintings, it’s easy to spot. Keep your eyes peeled for the shrine dedicated to photographer Brassaï. His “Conchita with Sailors, Place d’Italie” (1933) sits pretty in the vitrine.

Though a bit smaller, the Vintage Désir down the street at 32 rue des Rosiers also has bountiful goods aplenty. Then, pop tags by the kilo at the nearby Kilo Shop at 69-71 rue de la Verrerie Vintage. Tarb and scales abound, matey.

This week, I’ll close with a little Paris Pop Quiz.

Question: Name the French store where director Godard (Bargain Hunter Extraordinaire) purchased the dress. There was no official costume designer on the set.

Clipping Hemingway yet again, “My big fish must be somewhere!”

My Big Fish is out there at La Fontaine des Mers, Place de la Concorde

View of the Eiffel Tower from the Pont Alexandre III 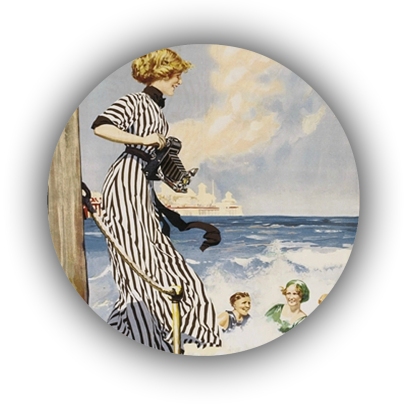