Paris: Seeking Light and Fashion on the Boulevards

One recent blue-skied day during Paris Fashion Week, I got to sit on the front row at the K-Collection show at the Palais Brongniart, historical home of the Paris stock exchange. Here, behind the massive columns surrounding the entrance, three Korean fashion houses presented their Spring-Summer 2020 collections: J. Chung by Jaesun Chung, Wnderkammer by Hyeyoung Shin, and Bmuet(the) by Byungmun Seo and Jina Um.

Mesmerized by the meshing of old and new: edgy mod and frilly prairie, I spied wild kinetic fringe, ruffled multi-tiered skirts and tops, and cheese-patterned frocks. Baguettes in bags, too.

Seeing the loaf of bread peeking out of the bag made me hungry, so after the show I took wing to the nearby passages. I’m always on the hunt for traces of the past in the City of Light, and the old glass-ceilinged “couverts” never fail to lift my spirits. There’s something incredibly moving about gazing at freshly baked cookies, portraits of cats, and diamond-collared doggies in the soft light of the old arcades and passageways that makes the lil’ treasures all the more glorious. So if you’re in the mood for some old-timey, two-stepping shop-hopping, just follow after me.

More inspiration for your OOTD mood board because, frankly, fringe with silver beaded detailing is always a great idea, post-show at the Palais Brongniart with the legendary Brasserie Vaudeville in view. (Photo by Theadora Brack)

A smidge of history

Ever since biggie wig King Louis XIV cried, “Let there be light,” tourists have been flocking to Paris. Under his reign, Paris became the first city in the world to illuminate its streets after dark, which helped turn it into the world’s premier tourist destination practically over (a well-lit) night. And what did they most want to do when they got there? Well, go shopping, of course. But where? 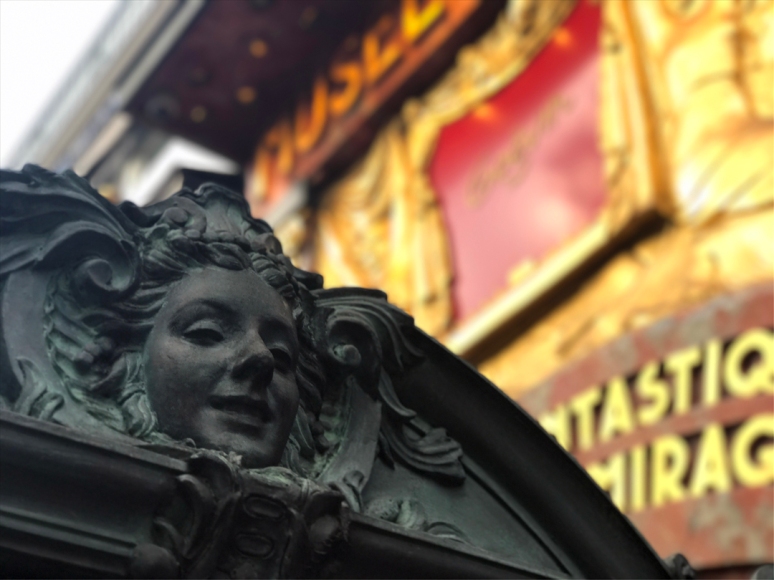 Cheesy confession: Seeing the baguettes peeking out of the handbag made me ravenous, so after the show I immediately hoofed it on over to the nearby arcades. Here, Passage Jouffroy. (Photo by Theadora Brack)

The launch of the first covered passages in 1800 provided the answer to their desires. Offering luxury goods and cafés in settings that were sheltered from rain—and the mud it creates—gas lit and (to some degree) heated with radiant warmth, these cozy urban spaces are where the shopping mall was born. Cutting through blocks to link streets and boulevards, the glittering, boutique-lined passages offered new shortcuts, flâneur-flavored promenades, and weatherproof shopping that were the delight of the early 19th century. 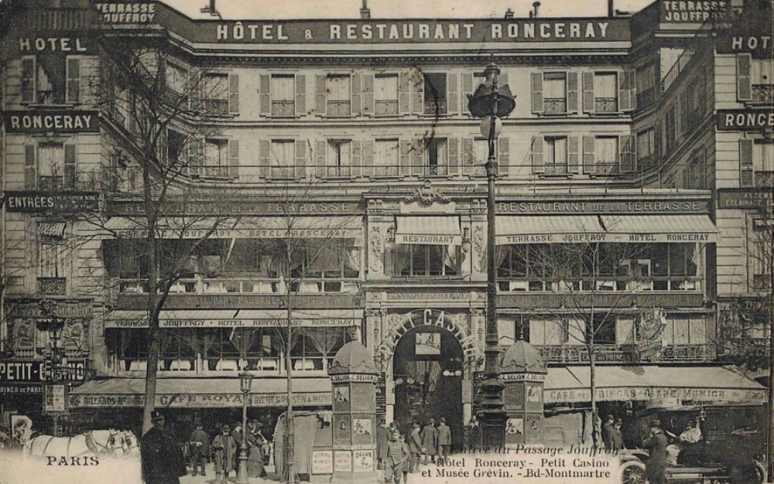 The early passages tempted shoppers with lux goodies and cafés in settings that were sheltered from rain, lighted with gas and (to some degree) heated. Passage Jouffroy in 1900. (Postcard, Theadora Brack’s archives)

Gone in a twinkling

Sadly, only about twenty of the nearly 150 original arcades survived Baron Haussmann’s sweeping urban renewal makeover in the 1850s and ‘60s. To be fair, though, he did bring about improvements in transportation that hastened the arrival of the world’s first department stores, like Aristide Boucicau’s revamped Bon Marché (1852) and Alfred Chauchard’s Grands Magasins du Louvre (1855).

By 1920, the heyday of the passages was long over. As one reporter wrote, “The passage is a souvenir from the past, of which many people would surely forget the existence were they not forcibly reminded it of whenever showers oblige them to seek refuge in that haunt once so fashionable.” 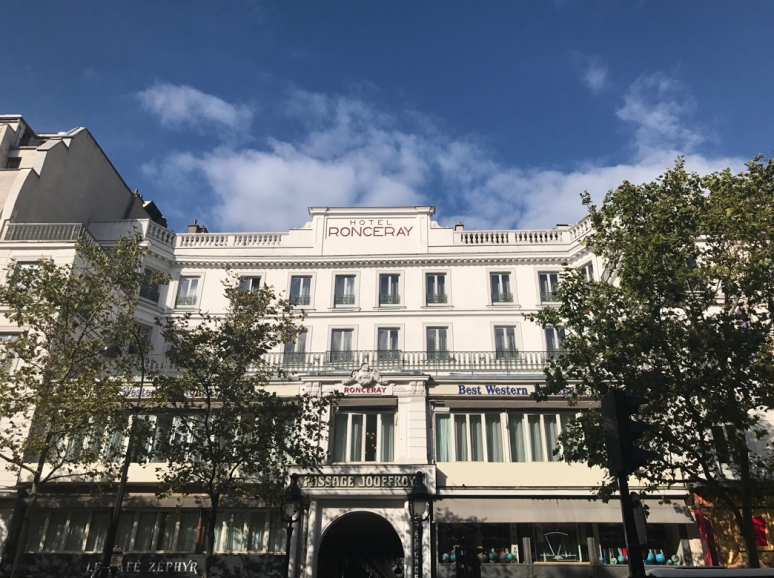 Keep on the sunny side: About twenty of the nearly 150 original arcades survived Baron Haussmann’s urban redo in the 1850s and ‘60s. Passage Jouffroy is still a peep-pleasing promenade in 2019. (Photo by Theadora Brack)

On the bright side

Happily, the old passages, like cowboy boots and rhinestone-encrusted western ranch shirts, have finally come back into fashion and are having one heck of a moment once more. Crummy and decrepit no longer, those that remain have become shopping meccas that are as hip as they are quaint, and very much worth a look-see.

Back in their first heyday

Émile Zola described the effect on one of the characters in his novel, “Nana,” which captures just how I feel today. “She adored the Passage des Panoramas. The tinsel, the false jewelry, gilded zinc, the cardboard made to look like leather, had been the passion of her early youth. It remained, and when she passed the shops she could not tear herself away from them.”

I know the feeling.

My favorite purple-clad mannequin, looking like timeless and confident. Note to self: Invest in some evergreens for my next social media profile portrait. Le Bonheur des Dames needlepoint shop, Passage Verdeau. (Photo by T. Brack)

Here’s my current favorite route. First, meet me at the Bourse, of course. Then:

Tip: I highly recommend rounding out your time-travel experience at the nearby Galeries Lafayette department store. After spending hours window-shopping in the narrow passages, it’s quite a trippy feeling to then hit the wide bustling boulevards, specifically created for power-promenading. Also, G.L.’s café has a view of both the Opéra and the Eiffel Tower, along with cheese plates and affordable mini bottles of wine. #Justdoit

(If you are an Instagram fan or fanatic, please leave a link below. Here’s where to find more of my Paris pics: @theadorabrack)

Where to start your stroll? Meet me at the Passage des Panoramas. Built by American entrepreneur James W. Thayer in 1800, here is where the City of Light tested its first public gas lighting installation, in 1816. (Photo by Theadora Brack)

If only the old stones and walls at the ole Panoramas could talk. Originally, the arcade linked two rotundas that rocked massive wall paintings offering panoramic views of Paris, Rome, Naples and Amsterdam. Though popular as the “Imax” of their day, they were demolished during the 1830s to make room for hotels and additional galleries. (Photo by Theadora Brack) 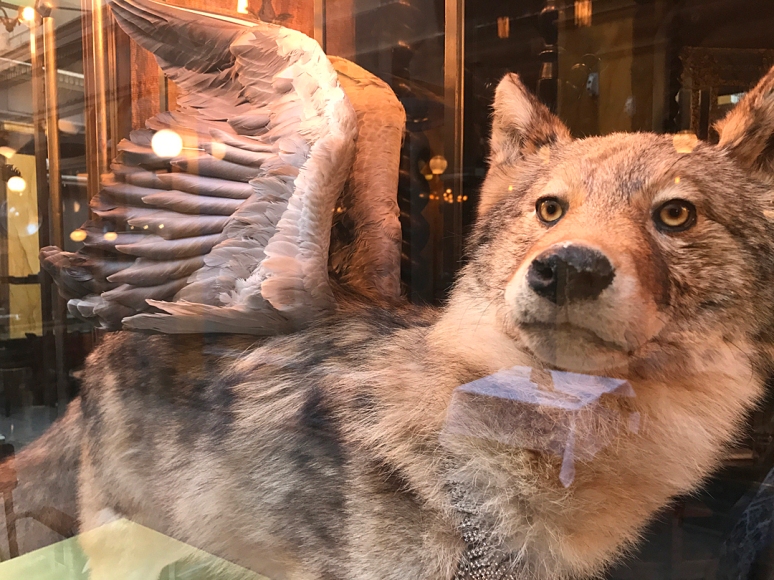 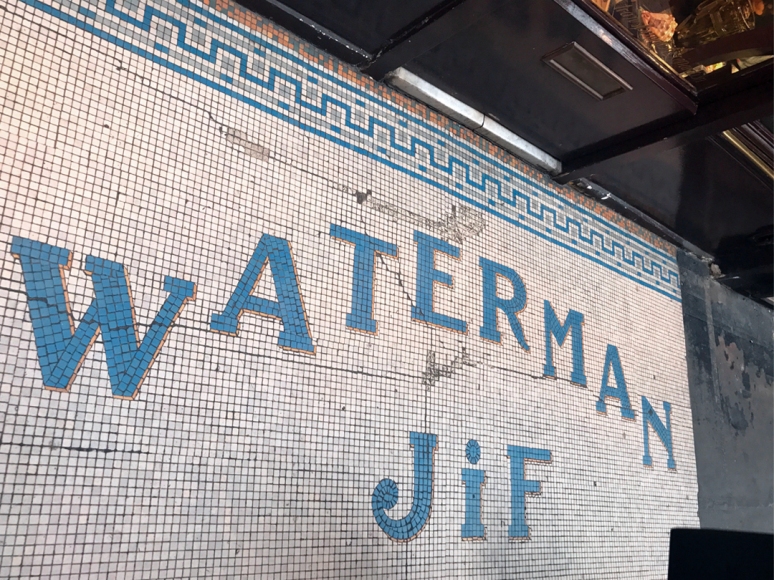 Another splash from the past at the Panoramas: Back in the day, I’m sure the Waterman shop was hopping after its “Three Fissure Feed” pen had won the gold medal for excellence at the 1900 Paris Exposition. (Photo by T. Brack)

Next to the Passage des Panoramas, you’ll find the Passage Jouffroy. Built in 1845 by architects François Destailleur and Romain de Bourges, it was the first arcade to install a heating system concealed under its tiled floor. (Photo by Theadora Brack) 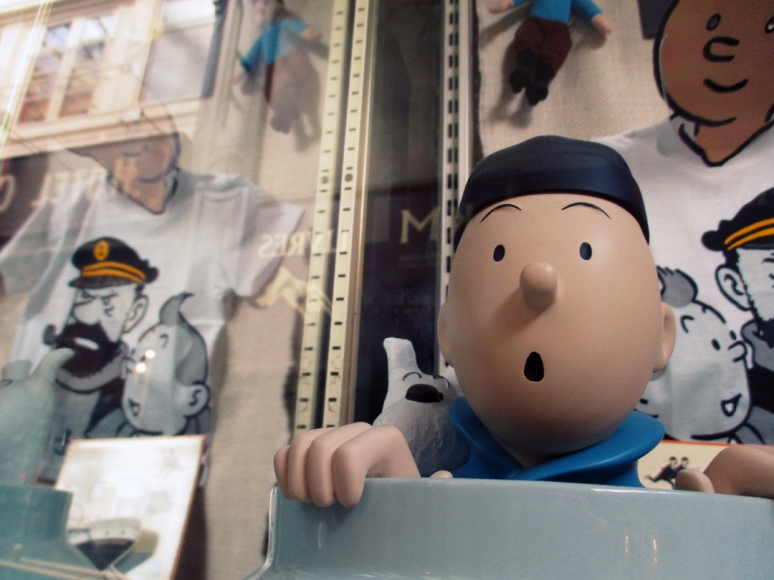 Where’s Tintin? Why, he’s still trapped in the vitrine at the bustling Toy Box boutique, looking cute as a button. Someone please purchase this world-famous globe trotting fella. #FreeTintin (Photo by Theadora Brack)

Chopin at the helm of the Hôtel Chopin—open since 1847. A friend stayed here once, and heard piano playing in the middle of the night. Piped-in music? Or perhaps the spirited dandy had returned for an encore? (Photo by T. Brack)

Tunnel vision: Because one shot of the Passage Jouffroy’s glass ceiling is never, ever enough, here’s one more. (Photo by Theadora Brack)

How much is that photo-bombing clown in the window? For the love of bright red lipstick and polka dots, meet my new BFF, ready for the Big Top at the Toy Box boutique in the Passage Jouffroy. (Photo by Theadora Brack)

Passage Jouffroy with Passage Verdeau in view. More convenient shop-hopping? Yes. After all, moderation is always key when it comes to Paris. Says absolutely no one. And that goes double for the arcades. (Photo by Theadora Brack) 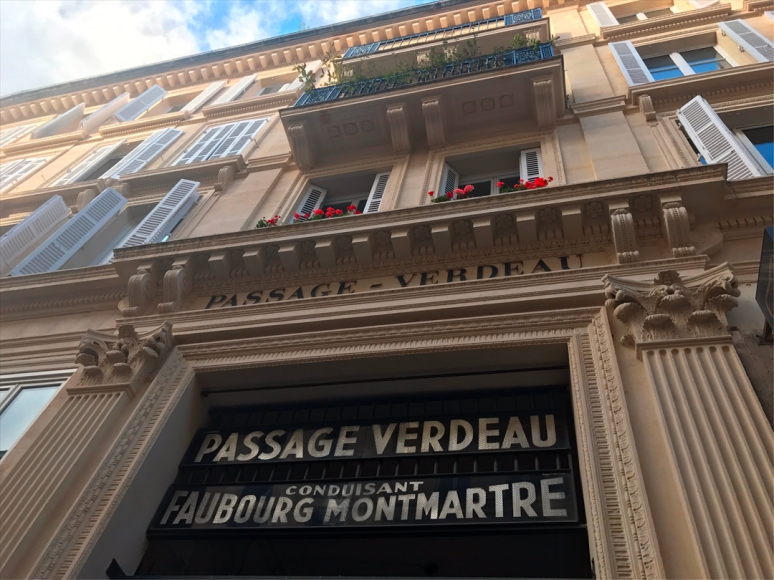 Last stop: Passage Verdeau, built by architect Jacques Deschamps in 1846.
I’m always on the hunt for traces of the past in the Paris, and this old “couvert” never fails to lift my spirits with its neo-classical lines. (Photo by Theadora Brack) 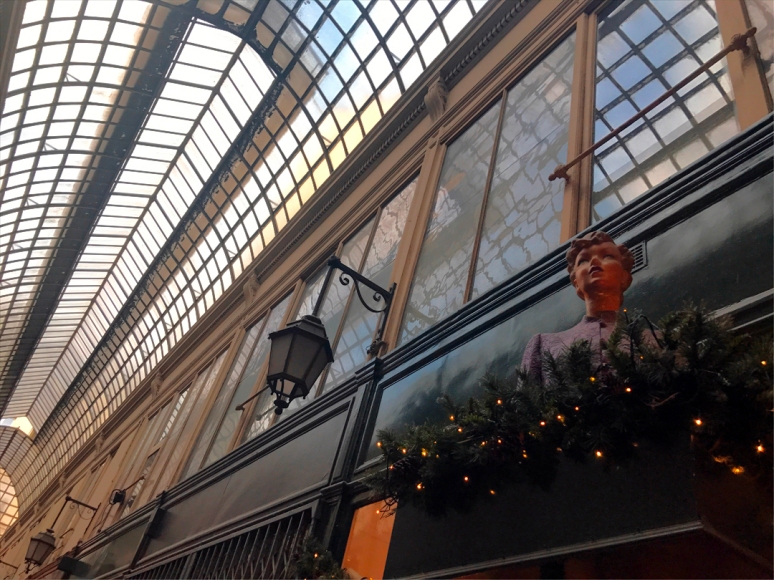 Vision of beauty and practicality: The Passage Verdeau’s spiny, fishbone-like clerestory roof was designed to allow for maximum light and airflow, while keeping out unpleasant elements like rain and snow. (Photo by Theadora Brack)

I’ve said it before. There’s something incredibly moving about flipping through used art books, vintage prints and antique magazines in the soft light of the old passageways that makes the treasures all the more glorious.

46 thoughts on “Paris: Seeking Light and Fashion on the Boulevards”