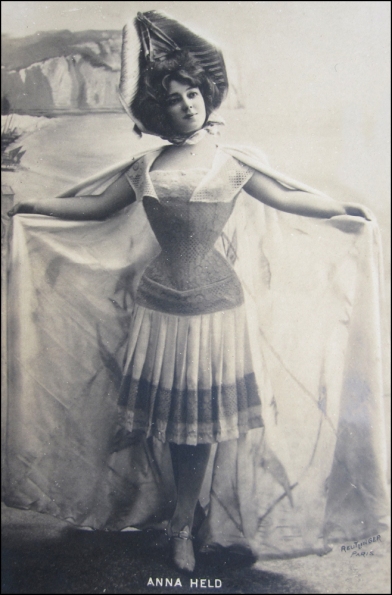 Fish! Flash! Today I’ve decided to slowly reel in the Poisson d’avril (April fool, literally “April fish”) with the catchy retelling of a whopper of a Vaudeville tale. So lean in, grab a soda pop, and then drop to the floor. It’s about to get hot and bawdy in here!

Here’s the scoop! Way back in 1894, French Vaudeville performer Helene Anna Held was sued by her friendly Greenfield Dairy milkman for not paying her bill. When she arrived in New York City, she had demanded 40 gallons of milk (at the rate of 20 cents per gallon!) delivered every other day for her decadent beauty bath.

Three hundred and twenty gallons later, Held cancelled the order, claiming the milk wasn’t fresh or creamy enough for her nightly beauty rituals. The milkman then hired a lawyer to help secure the $64 dollars she owed. The matter, however, was settled out of court because, “milk baths were too peculiar to be discussed in in public.”

After the story leaked, Held’s manager Florenz Ziegfeld, Jr. (of Ziegfeld Follies fame) held a press conference with reporters outside her hotel room. All but one New York City paper attended the media circus!

He told them that 2000 years ago an Egyptian slave had told Roman emperor Nero’s wife that bathing in ass’s milk would not only preserve her complexion, but Nero’s love. The secret had been kept ever since, until generations later a Nero descendant passed it on to Anna Held!

Asking if they would like to see her in her milk bath,  Ziegfeld then flung open the door to reveal Mademoiselle Held, chin-deep in milk.

Batting her wide flirtatious eyes, Anna told them, “At home in Paris I take a milk bath two times a week, but here on the road it is more difficult. I miss them.” For the love of drama, instantly a star (with an 18-inch waist and very proud of it!) was born.

Bonjour lait! Au revoir coeur! Soon women everywhere began bathing in milk. It came out later that the lawsuit had been cooked up by Anna and Florenz as a publicity stunt. He and Held married the following year. Well played, is what I would have said!

Pinching from Anna’s most popular song, “Won’t You Come and Play With Me,” let’s follow the bouncing ball and sing along, shall we? 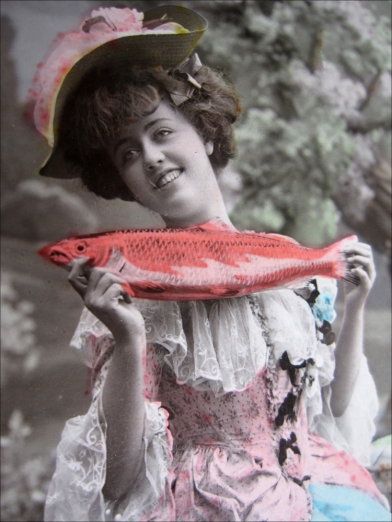 If you find yourself in France on April Fool’s Day, keep your eyes peeled for the tricksters. The classic old prank is to attach a paper fish onto the coattails of an unsuspecting victim. So watch your back!

Do you have a mad penchant for collecting vintage postcards? Follow me! One of my favorite shopping grounds for “cartes postale ancienne” is at Caveyron Devey, located at stall number 7 and 8 in the Passage Lecuyer (off Rue Jules Vallès) in the Marché aux Puces St-Ouen de Clignancourt.

Deciding exactly where to start your quest is the only glitch you’ll encounter here as you make your way though the narrow labyrinth of floor-to-ceiling boxes, stocked with postcards all meticulously organized by category or genre.

Looking for a specific category? Don’t be afraid to ask! Most of the postcards cost just a few euros. Cats? Clowns?  April’s Fool’s Day? Notre Dame? State your mission! They’ve got you covered.

Here’s another tip! If it’s a rainy or chilly day, wear a sweater or pea coat, because the stall is open to the breezes and sometimes damp. Also, if offered a seat at the house table to paw through a box, take them up on it, and browse like there’s no tomorrow. You’ll look like a serious aficionado and your tootsies will thank you!