The weather in Paris can change at the drop of a Schiaparelli hat, so pack your camera and parapluie, Pont Alexandre III, Paris (Photo by Theadora Brack)

Ahoy! Calling all Instagram Aficionados: This summertime grid tip is for you. Decked out in fifty shades of pearly grey, the Pont Alexandre III is the perfect backdrop for your photo-op. Rolling across the bridge has never failed to break this siren’s heart.

Designed by architects Joseph Cassien-Bernard and Gaston Cousin, Pont Alexandre III was one of the showstoppers at the 1900 Exposition Universelle—along with other new-fangled marvels like talkie movies, escalators, and mechanical sidewalks.

A picture perfect opportunity still, here the dramatic cloud cover high in the sky is your friend, so why not shake up the scene with a red trench coat or blue parapluie?

Because sometimes in Paris, a little rain must fall

No matter when you’re visiting the City of Light, the weather here can change at the drop of a Schiaparelli red-bottomed shoe-shaped hat. But showers don’t typically last long, so I recommend always packing your camera or camera phone.

Plus, completely agreeing with Gil Pender, the character Owen Wilson plays in Woody Allen’s “Midnight in Paris” movie, the city is drop dead gorgeous in the rain. It’s true.

Prior to your trip, study photos by the likes of Germain Krull, Ilse Bing, and Louise Dahl-Wolfe, along with Robert Frank, Brassaï, Robert Capa, and Man Ray, to catch that rainy day feeling. You’d think Paris never had a nice sunny day. 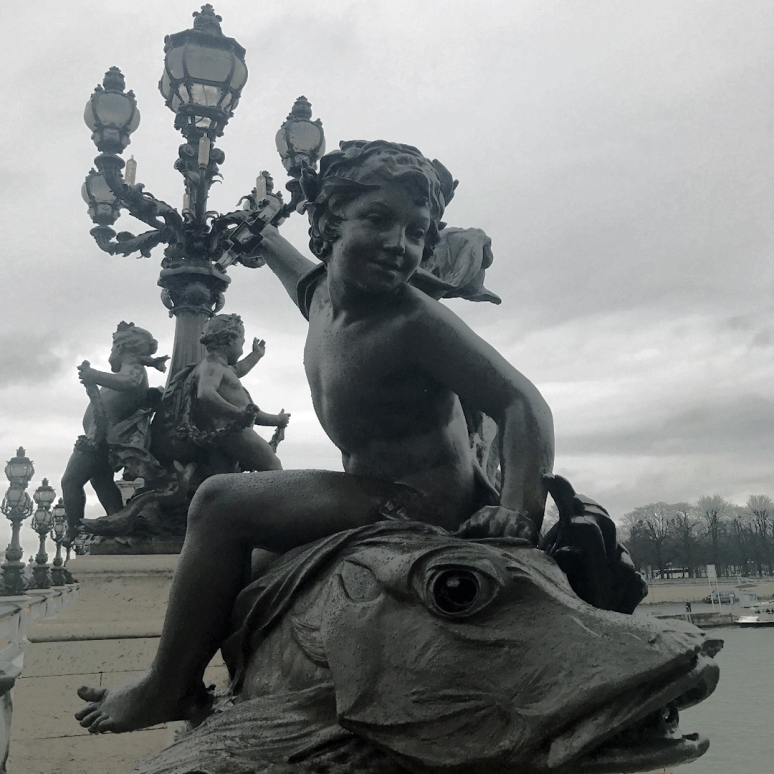 So why not let it pour?

Instant INSPO: Before your trip, study photos by the likes of Germain Krull, Ilse Bing, and Louise Dahl-Wolfe (Photo by Theadora Brack)

If you need a break from the rain or wind, it’s okay to hang out (and dry out) in a warm cafe with a coffee or a grog in a seat by a window—and keep shooting for hours. Nobody’s going to kick you out. It’s Paris, France, after all.

Don’t fret. Instead, get thee over to your favorite streaming platform, and watch English singer-writer Adele’s 2011 epic weepie “Someone Like You” video. Shot in black and white by director Jake Nava in a swashbuckler Wim Wenders sort of way, you’ll spy a spinning Eiffel Tower, Grand Palais, Invalides, and Place de la Concorde. 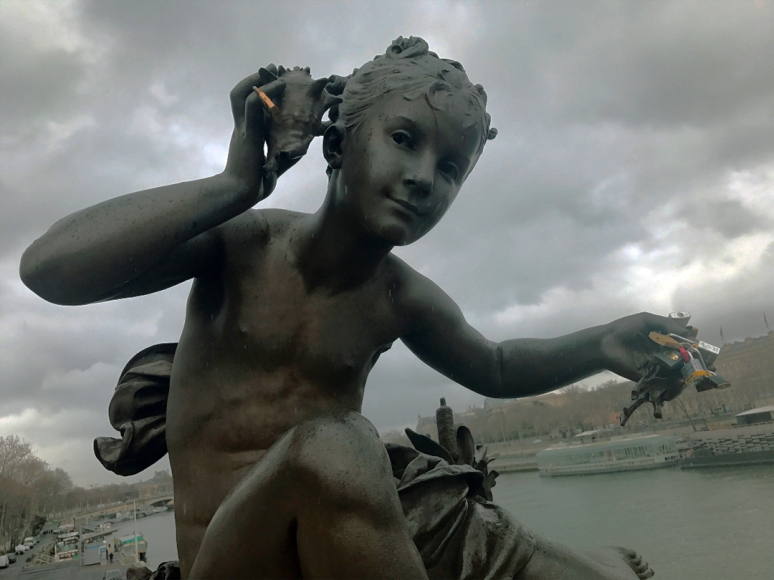 For the love of art and history, please don’t leave a lock on the bridge.  (Photo by Theadora Brack)

Aye, Style Mavens! Lux also marks its spot in this earworm of a sea chantey. Adele’s black A-line trench coat with an asymmetrical zip is from Moschino’s 2010 runway collection. Once every blue moon the canvas booty pops up on eBay. Maybe one day I’ll give it the old heave-ho and make the splurge when my Bateaux Mouche comes in.

A lassie can scheme, can’t she?

As Henry Miller penned, “The moment one gives close attention to any thing, even a blade of grass [or trench coat!], it becomes a mysterious, awesome, indescribably magnificent world in itself.” The world in a grain of sand . . . or a drop of rain?

Keep your eyes wide open. And keep on snapping.

(If you are an Instagram fan or fanatic, please leave a link below. Here’s where to find more of my Paris pics: @theadorabrack)

Do you have a favorite bridge in Paris? If so, do spill. Pont Alexandre III (Photo by Theadora Brack)

Hooked on the Parapluies of Paris, Montmartre (Photo by Theadora Brack)