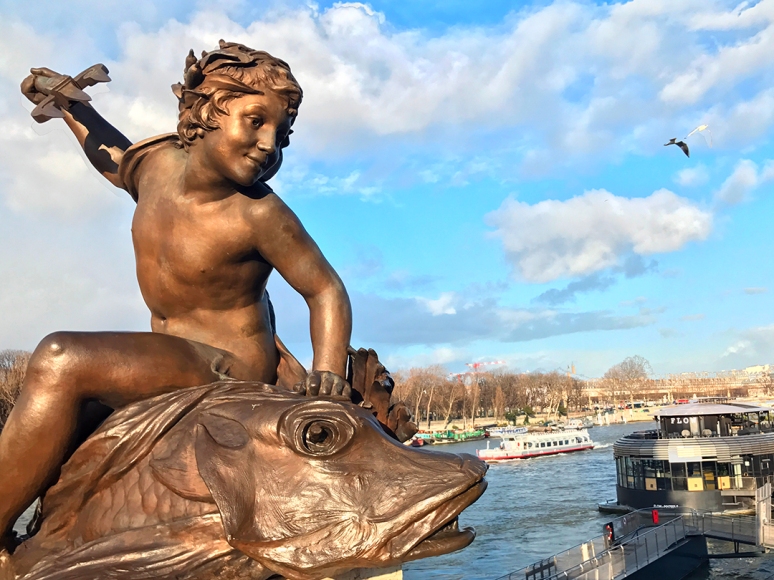 During these surreal and difficult days, I send encouragement and positive thoughts to all of you.

We will travel again, I’m certain. In the meantime, though, here’s a temporary break from our current unfamiliar reality and unrelenting news cycle. Celebrating little joys, let’s take a visual stroll across the Pont Alexandre III. Designed by architects Joseph Cassien-Bernard and Gaston Cousin, this most-ornate-of-all-Paris-bridges was one of the showstoppers at the 1900 Exposition Universelle—along with at the time new-fangled marvels like talkie movies, escalators, and mechanical sidewalks.

A perfect photo-op still, rain or shine—the arches of the bridge look every bit as radiant and pearly as the architects and the seventeen sculptors who adorned it surely intended. 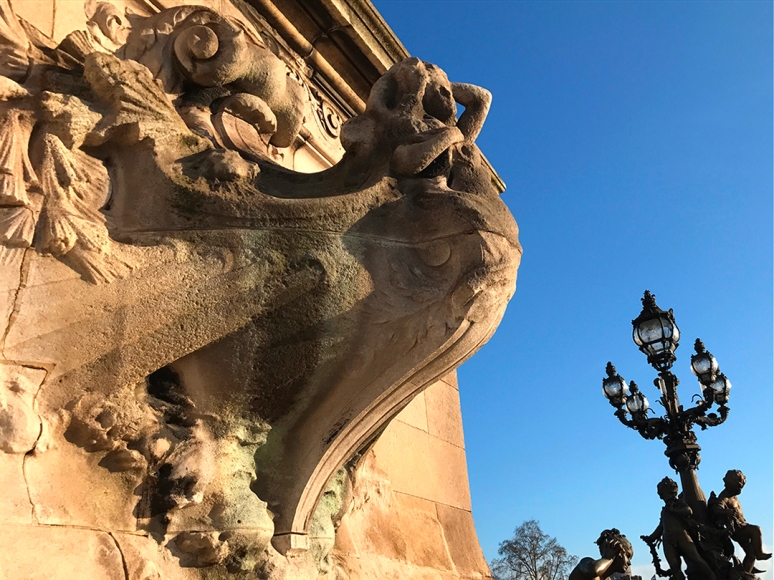 Let’s celebrate friendship at the New York Public Library with my favorite lions: Fortitude and Patience, sculpted by Edward Clark Potter and the Piccirilli Brothers, 1911 (Photo by Theadora Brack)

If you’ve got a weekend to spend in the Big Apple during the winter season, I highly recommend exploring the department stores along Fifth Avenue. As your sequined shoes make a brand new start of it, straight through the heart of it, don’t fight the feeling. This still gussied-up stroll will ignite your fire, especially after a cup of Li-Lac’s hot coco. Open since 1923, the Brooklyn-based chocolate factory just opened a new flagship in the West Village. Making no beans about it, it was love at first sip.

Nothing quite like it: I also love the aroma of a hand-rolled, kettle-boiled sesame seed bagel, Murray’s Bagels, Greenwich Village (Photo by Theadora Brack)

I’ve been walking the New York streets since the age of eight. I love the days when nothing gets between your blood and the city’s cacophony. The noise of honking cars. The sound of high heels click-clacking. The squeal of taxi brakes. The ringing of church bells. I’ll take it all. Especially the aroma of street food: falafel, french fries, pretzels, and hotdogs. I don’t even like hot dogs, but you haven’t really lived until you’ve feasted on one from a cart parked outside the Met on a frigid day in January. With relish, please.

Here’s how Anaïs Nin described New York City to Henry Miller during the 1930s: “I love the proportions, the amplitude, the brilliance, the polish, the solidity. I look up at Radio City insolently and love it. The newness. The vitality. Just bring your own contents, and you create a sparkle at the highest power.”

Oh, you said it, Ms. Nin. Now, shall we stroll? END_OF_DOCUMENT_TOKEN_TO_BE_REPLACED

Paris Tales: Swinging with the Kitties in the City

In celebration of the upcoming international Pet Travel Safety Day, let’s spend it with a few of my own favorite felines in the Paris, Abbesses (Photo by Theadora Brack)

Flying sky high on a lark, I knock. Grab a perch because I’ve got a feathered tale to tell. A great ball of yarn to re-wind, so to squeak. Ever since watching Walt Disney’s “The Aristocats” movie on the family television set at the age of nine, I’ve been obsessed with France and les chats domestiques. There. I have said it.

Ever since watching Walt Disney’s “The Aristocats” movie, I’ve been obsessed with France and les chats domestiques (Image: Moviestillsdb.com)

A story I tell often, frankly. That cartoon flick was a game changer. Not only did it leave me yearning to be the rhinestone-laden Parisian glamour puss (a.k.a., “Duchess”), but I also fancied running away with her swashbuckling, orange tabby beau, the flamboyant prince of the boulevard, “Abraham de Lacey Giuseppe Casey Thomas O’Malley—O’Malley, the alley cat.”

“Oh, c’est très jolie, monsieur Thomas,” I’d murmur again and again at my own reflection in the mirror, channeling my inner-Duchess. END_OF_DOCUMENT_TOKEN_TO_BE_REPLACED

Paris: Seeking Light and Fashion on the Boulevards

One recent blue-skied day during Paris Fashion Week, I got to sit on the front row at the K-Collection show at the Palais Brongniart, historical home of the Paris stock exchange. Here, behind the massive columns surrounding the entrance, three Korean fashion houses presented their Spring-Summer 2020 collections: J. Chung by Jaesun Chung, Wnderkammer by Hyeyoung Shin, and Bmuet(the) by Byungmun Seo and Jina Um.

Mesmerized by the meshing of old and new: edgy mod and frilly prairie, I spied wild kinetic fringe, ruffled multi-tiered skirts and tops, and cheese-patterned frocks. Baguettes in bags, too.

END_OF_DOCUMENT_TOKEN_TO_BE_REPLACED 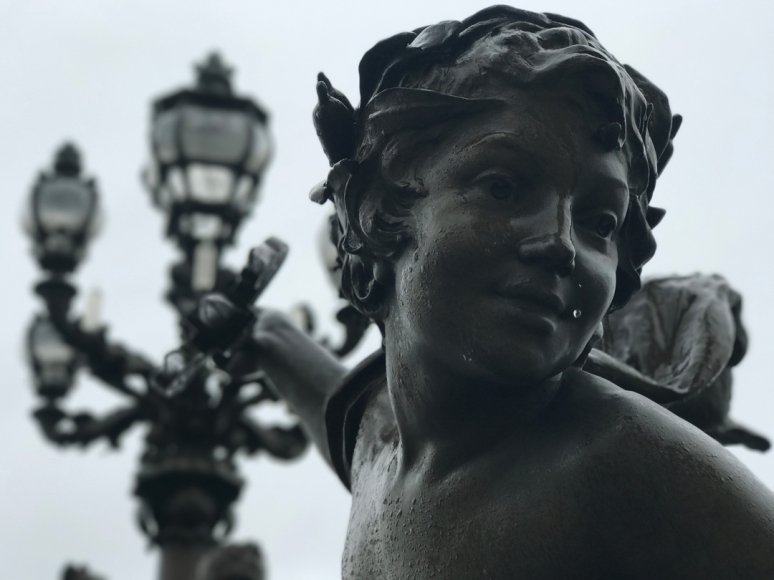 The weather in Paris can change at the drop of a Schiaparelli hat, so pack your camera and parapluie, Pont Alexandre III, Paris (Photo by Theadora Brack)

Ahoy! Calling all Instagram Aficionados: This summertime grid tip is for you. Decked out in fifty shades of pearly grey, the Pont Alexandre III is the perfect backdrop for your photo-op. Rolling across the bridge has never failed to break this siren’s heart.

Designed by architects Joseph Cassien-Bernard and Gaston Cousin, Pont Alexandre III was one of the showstoppers at the 1900 Exposition Universelle—along with other new-fangled marvels like talkie movies, escalators, and mechanical sidewalks.

A picture perfect opportunity still, here the dramatic cloud cover high in the sky is your friend, so why not shake up the scene with a red trench coat or blue parapluie?

END_OF_DOCUMENT_TOKEN_TO_BE_REPLACED

Paris Flea Market Guide: Off to the Puces!

Throughout the year, the City of de-Light stays retro-active with weekend flea markets and pop-up bazaars (Photo by Theadora Brack)

Bewitched by kitsch? Join the rave. Throughout the year, the City of Light stays retro active with weekend flea markets, along with open-air and tented pop-up bazaars. With so many venues, where to start? Here’s a Paris treasure hunt guide.

END_OF_DOCUMENT_TOKEN_TO_BE_REPLACED

Paris: To Notre-Dame with Love

Thanks to the courageous firefighters and emergency workers, Notre-Dame’s 18th century Grand Organ was rescued—with all of its 8,000 pipes still intact, we think. “None of the pipes have appeared to collapsed,” organ builder Bertrand Cattiaux told The New York Times. “We can just cross our fingers and wait.”

The bell towers were also saved. I’m still waiting for an update on my bells.
Did you know they have names? 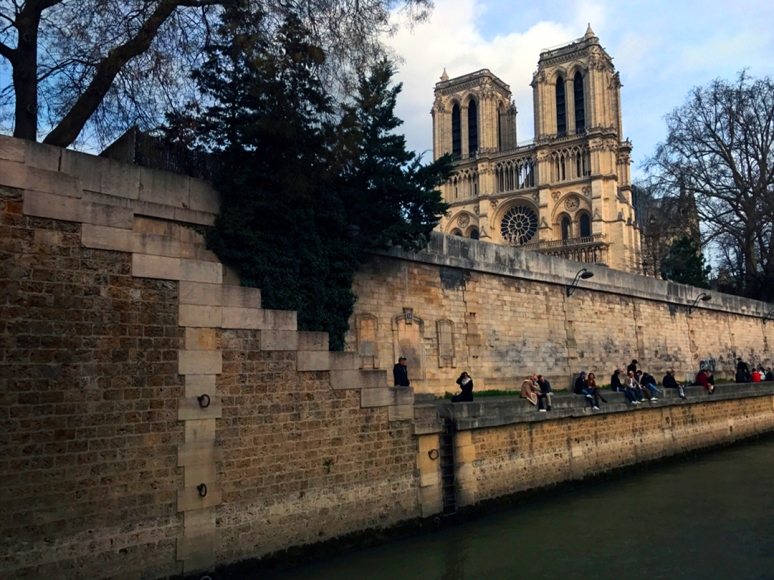 Thanks to the courageous firefighters and emergency workers, Notre-Dame’s Grand Organ and bell towers were saved (Photo by Theadora Brack, March 2019)

END_OF_DOCUMENT_TOKEN_TO_BE_REPLACED

This week, I’d like to introduce you to one of my heroes: suffragette and writer Louise Weiss.

So grab your bicycle and helmet, and let’s get to pedal pushing up the Montmartre slopes to Abbesses—Louise’s old “fight for the right to vote” stomping ground. It’s time to pay homage.

Traffic is heavy, but don’t fret yet. The autumn sun is still on our side of the rue.

As we round the butte, we spot the spot, close by Vincent Van Gogh’s former digs (at 54 rue Lepic). At the school just around the corner is where publicity maven Louise instigated one of her famously stormy powder puff battles.

Let’s prop our bikes up against the lamppost, and try to imagine the scene. END_OF_DOCUMENT_TOKEN_TO_BE_REPLACED

A Regal Run: Loping Through The Luxembourg

Fall Inspo: Why not rock the vote and head-to-toe grey with a splash of mustard? (Elle, 1951, T. Brack’s collection)

This week, for just one moment, let’s take a brief break from the news cycle and go for a jog in the park.

Personally, I can’t think of a finer way to re-charge and experience the City of Light’s past and present than kicking down the old cobblestone rues.

As writer George Sand once wrote, “Don’t jibe at the very wise advice that sentences you to one hour’s walk a day. You imagine the work of the mind takes place only in the brain; but you’re much mistaken. It takes place in the legs as well.”

So grab the baton and get stepping in my favorite Paris park: le Jardin du Luxembourg. Created with a Florentine twist by Queen Marie de Médici and gardening theorist Jacques Boyceau during the 17th century, it opened to the public in 1778.

Here, I’m not only able to run, but also mingle with the statues of French queens, saints, big cats, and writers. I’m hardly a martyr, or a monarch or a literary giant (yet!), but up my black Lycra sleeve I do have a few tips for a picture-perfect storybook run.

Let’s grab the baton and get stepping in my favorite Paris park: le Jardin du Luxembourg

END_OF_DOCUMENT_TOKEN_TO_BE_REPLACED

Statue of Liberty: Where is the Love?

Let’s once again doff our “bachi” to my favorite Franco-American collaboration, the gigantesque statue of Lady Liberty on Bedloe’s Island in the New York harbor. Still looking fierce in her spiky nimbus (that’s right, mythically speaking, it’s not a crown) and matching floor length chiton in all its copper green tonalities.

This week, I’d also like to share four copies of my new favorite book about our iconic idol: Her Right Foot. Created by writer Dave Eggers and artist Shawn Harris in 2017, this illustrated Junior Library Guild selection revels in the history of the 151-foot-tall international shining star, from her four-foot nose down to her fast-grooving toes.

Keep the torch moving: Her Right Foot by Dave Eggers and Shawn Harris, 2017 (Photo by Theadora Brack) I thank my friend Emily for introducing me to the award-winning book!