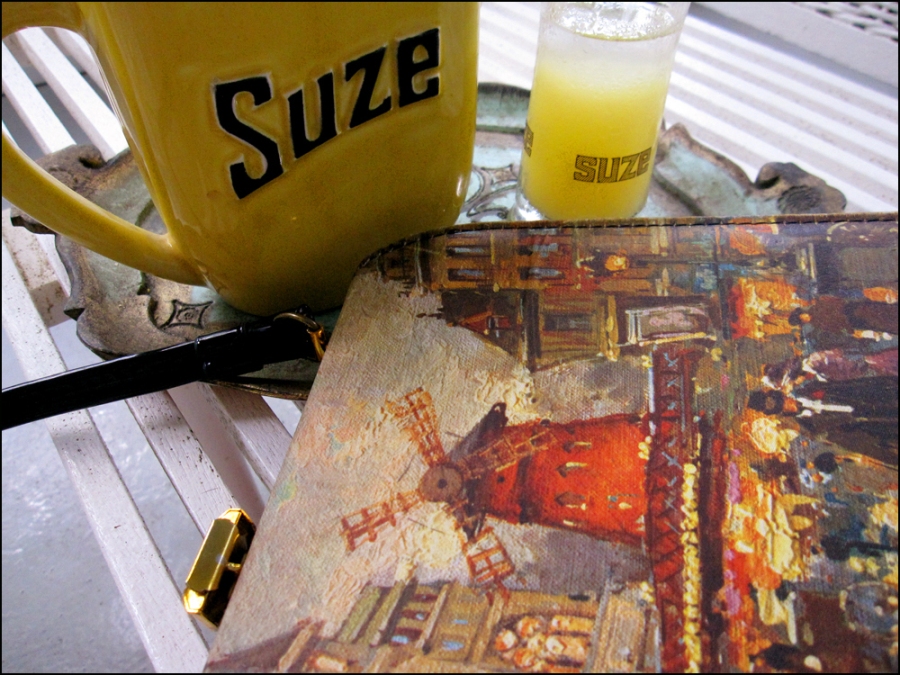 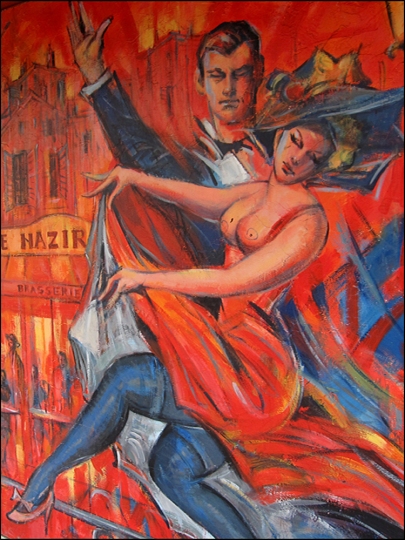 Mural on rue des Abbesses and Lepic (near the Moulin Rouge)

Get to stepping because we’re going lingerie shopping in hilly Montmartre. Lightweight and affordable, they’re my favorite souvenirs. If buying dozens of French slips is wrong, I don’t want to be right!

But first, for the love of petticoat inspiration, let’s kick off our quest at the Moulin Rouge. You know the thrill! Grab your bag, cocktail, and Kodak camera.

Topped with a 40-ft high cylinder-shaped beacon with spinning wings, she emits a deep reddish glow. Shining like a superstar, liquid neon signs and bright floodlights bounce up against her façade, spilling out onto the street in an illusion of a soft red sea. This strange effect has never failed to make my heart swell and knees buckle.

Wind it back, girl

“Life is beautiful; here comes the French Cancan!” artist Henri de Toulouse-Lautrec would shout out before the highly charged show within the Moulin Rouge’s pulsating walls.

Built in 1889 by Charles Zidler and Joseph Oller (founder of the Nouveau Cirque—the first venue in Paris to offer the comfort of reclining seats!), the Moulin Rouge has remained the undisputed queen of cabaret dance halls and monarch of her neighborhood, Montmartre—where at one time as many as 30 windmills turned “as swiftly as the Parisians’ heads,” as one Italian poet wrote. 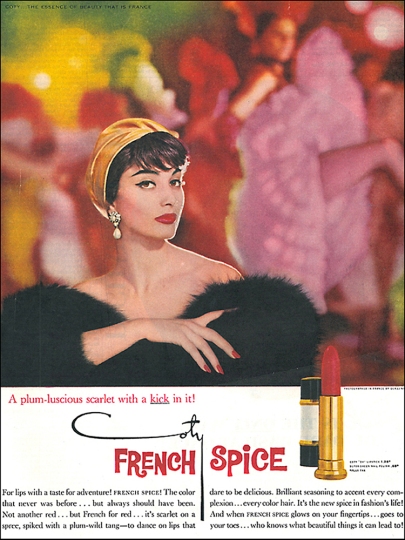 Back in the day

The eager crowd would rush the stage, forming a tight circle around the cancaneuses. Hemmed in by their aggressively courted fan base—sometimes six-deep, the dancers performed the quadrille naturaliste, always competing to see who could kick the highest with (but often without) pantaloons underneath their multiple layers of frothy petticoats, before climaxing with a final exuberant high split in mid-air!

“Naked feet, and thighs, and arms, and breasts were being flung on me from bloody-red foam of translucent clothes,” wrote Andrey Bely in his 1906 letter to Alexander Blok about the “Tavern of Hell” at the Moulin Rouge, where lackeys dressed as devils and dancers whirled demonically. Talk about a show-stopper!

On the flip side

Dancer Jane Avril’s description of the scene reads like a poem or an inventory list: “The dancer’s petticoats, twelve meters long, and the knickers, lace inserts, black stockings in the midst of the snowy white highlighted the shape of the leg.”

Always ahead of the curve, Toulouse-Lautrec’s favorite red-haired muse was the first to wear vibrant-colored undergarments and ruby red lipstick! 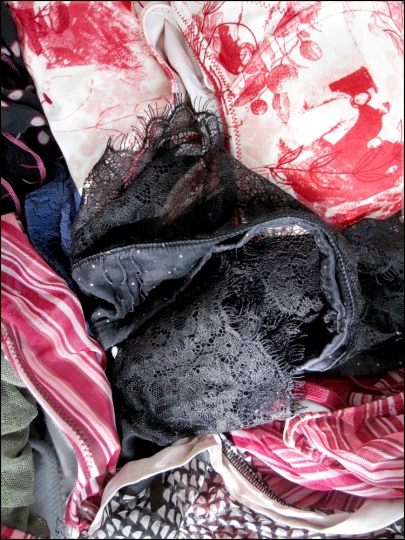 Fast forward: If anything, the show is even more spectacular today. On a typical evening dancers now go through 1,000 costumes, 800 pairs of shoes, and 60 kilos of jewelry and glitter—for just one show. Heads-up: The Moulin Rouge is not a cheap date!

I see London, I see France

Now let’s hotfoot it to the bargain bins of Sympa, located just a cobblestone’s throw away from the steps of la Basilique du Sacré-Coeur in Montmartre. Here you’ll find lingerie, dresses, blouses, skirts, and coats–all trendy chain seconds from previous collections, but for only a tiny fraction of their original cost.

Tips: The best deals are always in the exterior bins on the sidewalks. Hang tough. Own your corner of the bargain bin! Inventory rotates. Etam, Petit Bateau, and Unzies sit pretty on the outside, while Chantelle and Huit hold court inside. Keep your head during the panty raid.

It’s not difficult to walk away with armfuls of delicacies, trimmed with ribbons and bows, and each possessing a provocative names like “Extravagante,” “Hypnotique,” “Promesse,” “Amourette,” “Faveur,”  and finally, yes, yes, “Bliss.”

My favorite Sympa hotspot is at 60 rue de Steinkerque, a street once notorious for its prostitutes and dance halls. Yes, Pablo Picasso also shopped here. Imagine the surreal charm of shopping for your “unmentionables” in the former brothel that Picasso actually frequented during his “blue period!”

Here also is where the famed terpsichorean, La Goulue (Another muse of Toulouse-Lautrec), made her debut before defecting to the Moulin Rouge. In this ‘hood, she earned her moniker for nipping drinks from her audience while distracting them with her pantaloons and little pet goat. Nab your own knickers in the very room where she once flashed hers so fetchingly at the absinthe-quaffing crowds. Strike up the band!

“When I see my behind in these paintings, I find it quite beautiful!” La Goulue told Toulouse-Lautrec when she saw his drawings of her.

Whether you’re in the market for false eyelashes,  fluorescent wigs, custom-made corsets, or Nancy Sinatra-worthy latex go-go boots, they’ve got you covered both night and day! 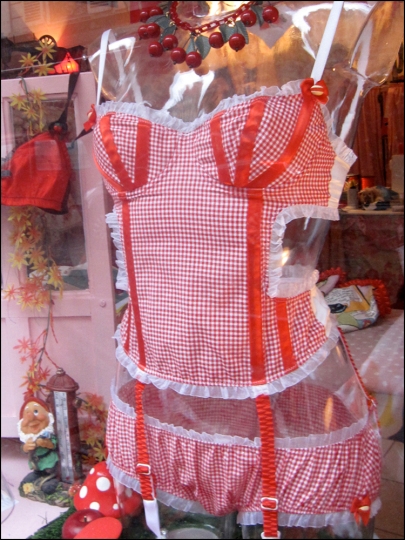 Tip: Both shops are kitty corner to the Moulin Rouge, another perfect photo-op for your social media profile portraits. I’d recommend arriving around l’heure bleu (twilight). Also, keep your eyes peeled for the spirit of writer Henry Valentine Miller on the literary prowl. An avid and competitive cyclist, he’d be quite happy with the new bike lanes!

In the Mood for Art after your spree?

Espace Dalí
11 rue Poulbot (Métro: Anvers, Pigalle Abbesses, or Blanche)Dive into the convoluted imagination of the surrealist master. Here is one of my “happy” spots in the city. There’s also a gift shop!

Musée de Montmartre
12 rue Cortot (Métro: Anvers, Pigalle Abbesses, or Blanche)
Here is where Impressionism began. After visiting the museum, pop by the nearby vineyard. For the love of Steinlen, cats still guard the grapes!

Musée de l’érotisme
72 boulevard de Clichy (Métro: Anvers, Pigalle Abbesses, or Blanche)
The jumping joint is usually open until 2 AM. Check out their permanent exhibition on famous brothels in Paris. And yes, there’s a gift shop here, too!

Clipping from dancer Jane Avril, “”One more time! One more dance! Maybe this is my last!” 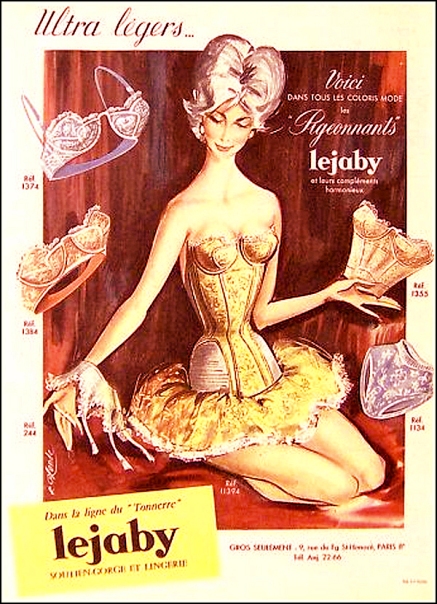 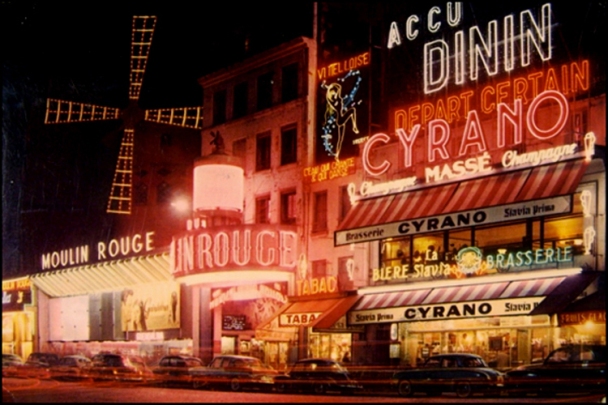 Winding it back at the Moulin Rouge, 1950s 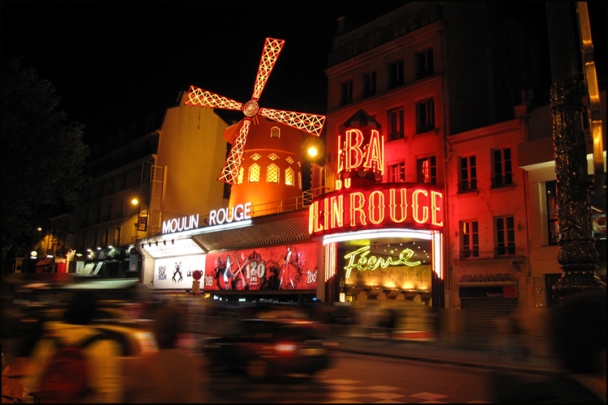 Fast Forward at the Moulin Rouge 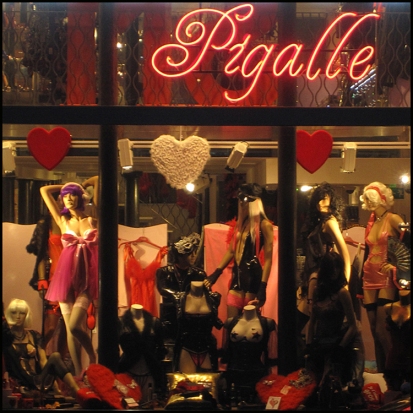 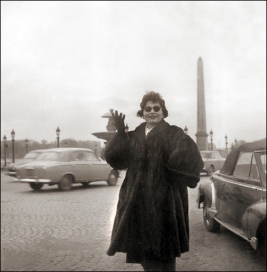