Peace, love and understanding on the “80” Bus

Make no tips, hands or buts about it, “Les soldes d’hiver 2013″ are in full swing in Paris. They began on January 9 and will last through Tuesday, February 12. So this week, I’ve decided to wear my dark felt tour guide hat, and create a special excursion. Swagnificent miles, here we come.

The “80″ bus line connects two of my favorite shopping districts in the city: rue des Abbesses in the 18th arrondissement and rue du Commerce in the 15th. Nestled in cobblestoned ’hoods with views to boot, both flaunt a cool blend of bargain bins, “indy” designer boutiques, funky shops, and trendy chains.

For the mere price of a Métro ticket, you’ll not only cruise between the shopping havens with the greatest of ease, but also boast about your first scores of the day while the panorama of Paris rolls by en route to the next shopping district. The “80″ is one of the most scenic bus lines so keep your eyes open and camera in hand!

We’ll first hit Abbesses (Métro Abbesses) in the morning. The neighborhood has a bustling village vibe about it, and is chockfull of shops, cafés, and hair salons. Even Louis Vuitton recently fell under its spell, and named one of their signature canvas messenger bags “Abbesses.”

Layout of the Land: Chains sit pretty on rue des Abbesses, while most of the vintage shops and funky designer boutiques hold court on the side streets. On Sundays the area becomes a pedestrian-only and traffic-free district. (The shops in the Marais are also open on Sundays, by the way.)

Dial back the clock at Le Caverne à Fripes at 25 rue Houdon. Here the inventory is eclectic, and may seem chaotic but don’t let looks deceive you. The collection is quite organized. After a few minutes, you’ll recognize the system: shirts to the left and skirts on the right, while party dresses hang coolly in the back!

On the make for a specific item? Don’t hesitate to ask proprietor Patrick Lambert. He once kindly tracked down a handsome “bachi” (French sailor hat) for me. Prices are reasonable, too.

Nadine’s Dam Dim Dom at 18 rue Damrémont also has a well-organized collection of clothing, alongside striking film memorabilia on the walls (watch out for New Wavers Jean-Luc Godard and Anna Karina!). 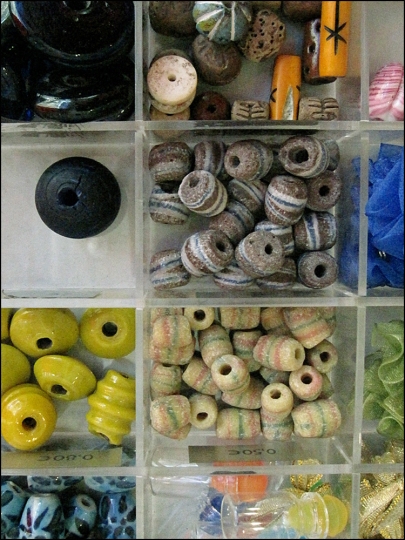 While trekking about, check out Van Gogh’s old third floor apartment at 54 rue Lepic. A plaque marks the spot where he lived with his brother Theo around 1886.

While in Paris, Vincent exhibited works at Julien “Papa” Tanguy’s  art supply shop on rue Clauzel, and hobnobbed with other artists like Seurat, Pissarro, and Bernard, along with Signac, Gauguin, and Toulouse-Lautrec.

Vincent wrote: “I saw Tanguy yesterday, and he has put a canvas I’ve done in his window. I have done four since you left, and am working on a big one. I know that these big long canvases are difficult to sell, but later on people will see that there is open air in them and good humor.” Good call, Vincent.

Tip: Stand with your back to Van Gogh’s house and you can see the very same view he painted from his window–it hasn’t changed at all (see below).

Paint your palette blue and grey

Feeling all inspired and starry eyed after the visit? Then pop by Sue Jaulent’s cozy Matière à Bijoux bead shop located directly across the street, and create your own work of art. Light weight and affordable, handmade bling is always the perfect souvenir in my book. Open for nearly a decade, Sue knows the neighborhood like the back of her well-accessorized hand. So feel free to ask for tips. She knows!

After we shop ’til we drop in Abbesses, we’ll hop on the “80” bus. The bus stop is located at rues Caulaincourt and Tourlaque, just around the corner from Toulouse-Lautrec’s old atelier at 7 rue Tourlaque!

On our way to rue du Commerce, we’ll pass the Cimetière de Montmartre, Gare Saint Lazare, and the Église Saint-Augustin de Paris, along with the École Militaire and the unofficial Princess Di memorial at Pont de l’Alma.

Signal the driver because we’ve reached our final destination. Like Abbesses, rue du Commerce rocks a village vibe. Here you’ll find Monoprix, Etam, Cameliau, Zara, and H&M—where, by the way, according to rumor, a pair”Jimmy Choo shoes for H&M” were once spotted here in the very back of the sale racks!

H&M isn’t the only chain to tangle with designers.  Monoprix has been featuring star-studded collections “Les-Invites-Createurs-de-Monoprix” for nearly a decade.

At the moment, sweaters by Alpaga du Pérou and “Visible” lingerie by Vannina Vesperini are available for sale. I’ve got my eye on a gorgeous green silk night gown with cobalt blue lace trimming.

Trekking to Paris after the big sales? Don’t fret. Monoprix discounts their clothing throughout the year. They also sell everything from groceries and wine for your picnic, to sunglasses, and band-aids. It’s one-stop shopping for all your strolling needs. Tip: The location on Boulevard Sébastopol is housed in a Félix Potin building (a masterpiece!).

Clipping from the classic French film, “Don’t use the brakes. Cars are made to go, not to stop!”

View of Paris from Vincent’s Room on the Rue Lepic, 1887 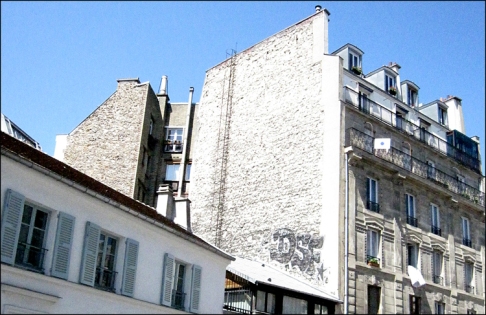 View of Paris from Vincent’s Building on the Rue Lepic 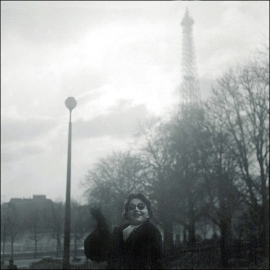 58 thoughts on “Paris: Smooth Sailing at the Big Winter Sales”