Flashback!  It wouldn’t be Poisson d’avril (April Fool’s, or literally, “April fish”) without the annual retelling of my favorite whopper of a Vaudeville tale.  I’ll also show-off a new batch of April Fool’s Day postcards, freshly scored at the Vanves Flea Market.

So grab your rod and reel while I trap the Picon-bière. Created in 1837, this bittersweet kiss of oranges and deep blue gentian flowers is typically served with a sudsy demi-pression, into which you splash a shot of Picon. Richly colored and aromatic, the orange-toffee flavored brew packs a potent punch, perfect for “l’heure de apéritif” and some fine vintage spinning!

Here’s the scoop: In 1894, French Vaudeville performer and Folies-Bergère dancer Anna Held was sued by her Greenfield Dairy milkman for not paying her bill. See, when she arrived in New York City from Paris, she had demanded 40 gallons of milk (at the rate of 20 cents per gallon!) delivered to her hotel every other day for her decadent nightly beauty baths.

Splash Forward: Three hundred and twenty gallons later, Anna cancelled the order, claiming the milk wasn’t fresh or creamy enough for her beauty rituals. The milkman then hired a lawyer to help secure the $64 dollars she owed. The matter, however, was settled out of court because, “milk baths were too peculiar to be discussed in in public,” according to the newspaper reports.

After the story leaked,  Held’s manager, Florenz Ziegfeld, Jr. (of Ziegfeld Follies fame) held a press conference with reporters outside her room at the Marlborough Hotel. All but one New York City paper attended the frothy affair. “The milk was sour and entirely unsuited for milady’s bath—in fact, it spoiled her complexion!” said “Flo.”

He also told them that 2000 years ago an Egyptian slave had told Roman emperor Nero’s wife that bathing in ass’s milk would not only preserve her complexion, but Nero’s love. The secret had been kept ever since, until generations later a Nero descendant passed it on to Anna Held!

Asking if they would like to see the fetching Anna in the aforementioned milk bath, Ziegfeld then flung open the door to reveal the bubbly Mademoiselle Held, “laving her rose leaf limbs,” chin-deep in milk.

Batting her wide, flirtatious eyes, Anna told them, “At home in Paris I take a milk bath two times a week, but here on the road it is more difficult. I miss them.” For the love of drama, instantly a star (with an 18-inch waist and very proud of it!) was born.

Word quickly spread: Soon women everywhere began bathing in milk. In fact, a “dairymaid” in Cologne, France was caught daily soaking in fresh milk before selling it! It came out later that the lawsuit had been cooked up by Anna and Florenz as a publicity stunt. He and Held married the following year. Well-played, I’d say! 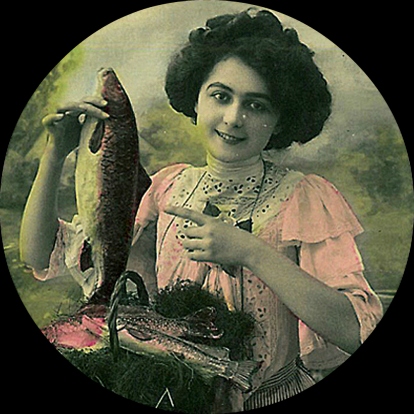 Don’t put all your fish in one basket!

Pinching from the popular song in the 1906 musical, “The Parisian Model” (one of Anna’s hit roles), “My lips may say, Run away from me, But my eyes say, Come and play with me! I just can’t make my eyes behave!”

If you find yourself in France on April Fool’s Day, do keep your eyes peeled for the tricksters. The classic old prank is to attach a paper fish to the coattails of an unsuspecting victim. So watch your back!

My current favorite hunting ground for “cartes postale ancienne” is at the Porte de Vanves Flea Market. Here you’ll find ephemera dealers and wheelers throughout the market. My favorite stalls are located kitty-corner to the piano player and snack shack halfway through the market.

Looking for a specific category? Don’t be afraid to ask! Marie Antoinette? Montmartre? Cats? Spill your obsessions. They’ve got you covered. Plus, the dealers will often give a discount or a free post card as a gift (un petit cadeau)! Here fidelity is appreciated and rewarded.

Love Me or Leave Me – Let’s Make Whoopee! 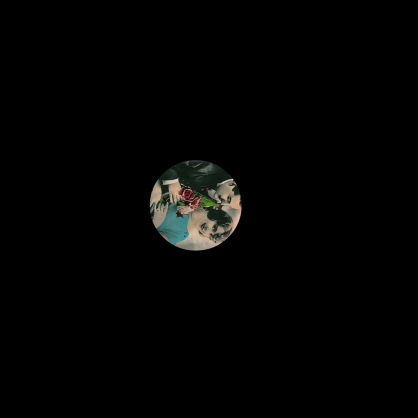 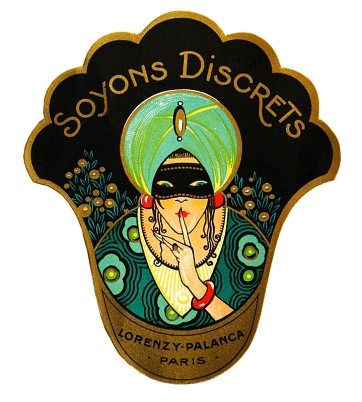