Got the Mean Reds? Let’s Hotfoot it on over to Bon Marché (Photos by Theadora Brack)

I’m Waiting for the Man at Bon Marché

Celebrating the launch of the “Les Soldes d’Eté” (Summer Sales) on Wednesday, June 26th, I’ve decided to hit the streets of Paris for some window-shopping. Like Holly Golightly, whenever I get the mean reds, I foxtrot it on over to the grand magasins along Boulevard Haussmann. It’s my favorite nook of paradise in the city. Here the lights are much brighter and the rooftop views are always free.

At the flea market, I recently scored Frances Waxman’s illustrated 1912 slim gem: “A Shopping Guide in Paris and London.” Feeling groovy, let’s take a spin around Paris with her handy-dandy of a shopping guide. I think you’ll dig her tips.

For instance, back in the day, globe-trekking, yet frugal, fashionistas flocked to the department stores to feed their bargain basement blues. On Fridays, the shops lured passersby inside with fantastical displays of discounted silk remnants (a.k.a. “coupons”)—”things which can be combined into a French creation.” Someone get Martha Stewart on the horn! She’d approve.

Rebel, Rebel Tip: For walking, Madame Waxman recommends sporting a skirt short rather than with a train that must be held up in “French fashion.” I second that motion. All the better to carry beaucoup shopping bags, I’d say. Grab the leather gants. I’ve got the parasols. Let’s put the hustle in the bustle!

Waxman sets the scene: “Underclothing of all sorts, stockings, handkerchiefs and gloves are all good and cheap at the Bon Marché! It is a fact that the large balls of darning cotton sold here have a certain renown among frequent visitors to Paris.” Don’t ever underestimate the power of a “Made in Paris” label. Then, now, and hopefully forever!

“The cathedral of modern commerce!” is how Émile Zola neatly described Le Bon Marché in his novel “Le Bonheur des Dames.” The store was the first to launch fixed pricing, welcome stations staffed with English-speaking personal shoppers, and self-service. Even prostitutes were welcomed here with open arms.

Dressed to the Nines: Winding it back to the 1870s, the Paris department stores were the first in the world to install polished plate glass windows because of their close proximity to the France-based Saint-Gobain Glassworks. Ahead of the curve, yes, but it still took awhile for faire du lèche-vitrine (“window licking”) to catch fire. Some shops even hired paid window shoppers to tempt others to do the same.

Soon shoppers were stopping by the new “walk-around” palace on a daily basis. They were hooked. Even as the Prussian army surrounded the city in the war of 1870, American and English fashionistas didn’t flee but kept on shopping at Bon Marché, because a trip to Paris without having shopped would be a “life-long regret.” Now, who hasn’t been there before?

After picking up a petit four or five at Bon Marché’s La Grande Epicerie de Paris (one of the world’s largest international food labyrinths), we’ll take the Métro up to Boulevard Haussmann, where Printemps and Galeries Lafayette sit pretty. Along the way, let’s flip once more through Waxman’s 1912 Paris shopping guide, and get still more scoop.

“As the Parisians go to the Bon Marché for their substantial things, they go to Printemps for hat and dress trimmings. Galeries Lafayette is a good place to look for bargain blouses! The lingerie there is often beautiful, and ready-made dresses are to be had in every sort of material and of every degree of elaboration. And its prices are not too high!” Do you hear what I hear? Music to my ears.

Under the looking glass

Tip: While promenading up and down the boulevard, don’t leave without nipping inside Galeries Lafayette for an peek at its glass domed ceiling by architect Ferdinand Chanut. Installed in 1912, this Belle Epoch beauty with a Byzantine twist never fails to dazzle with its razzle. I suggest taking the escalator to the first floor above ground level.

After a quick fly-by through Jean-Charles de Castelbajac’s witty garb, lean over the Art Nouveau balcony for a rather spectacular aerial view of the beauty booths below. The logos were installed specifically for this bird’s-eye perspective. Here the phantoms keep time with the fragrance hawkers down below. Squeak to squeak, I’m in heaven.

As our good chum Virginia over at Bel’ Occhio would say, “A dangerous liaison – this is what Paris is all about. Every woman knows. This frisson of excitement. This bargain well found. This carrying of bags and box. This Paris mine.” 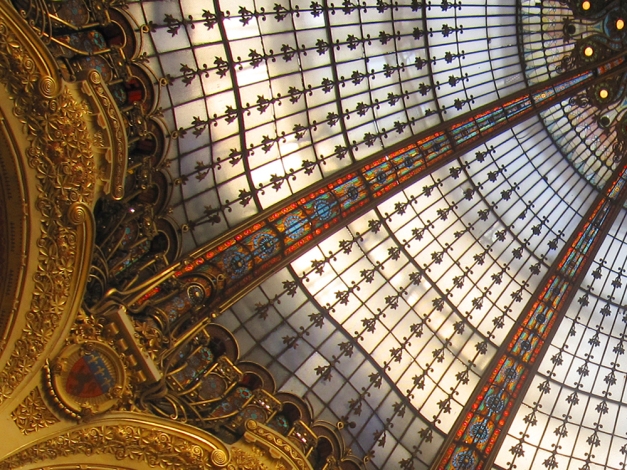 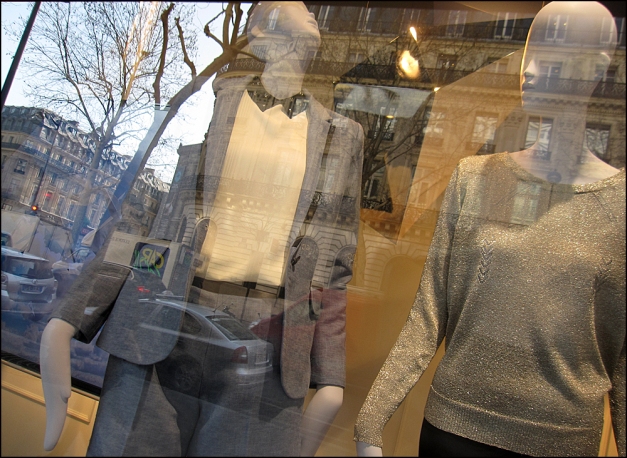 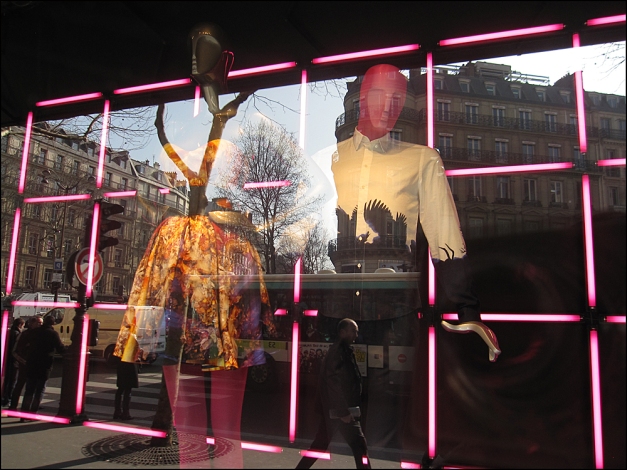 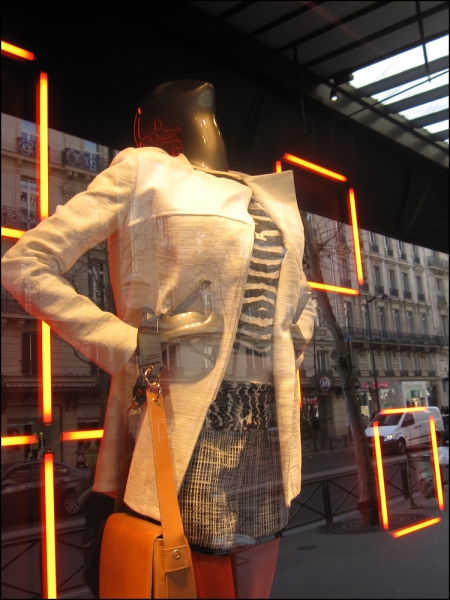 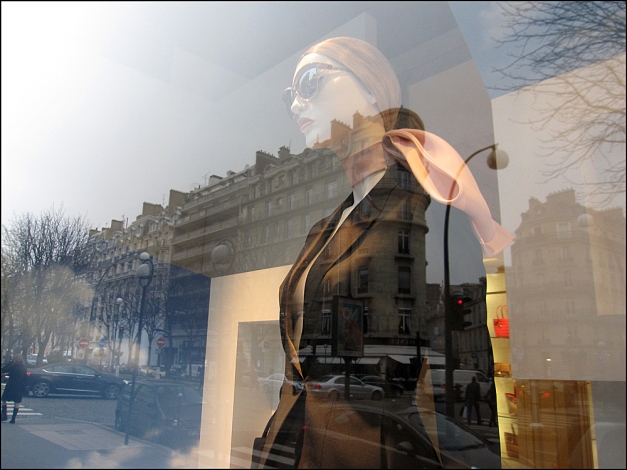