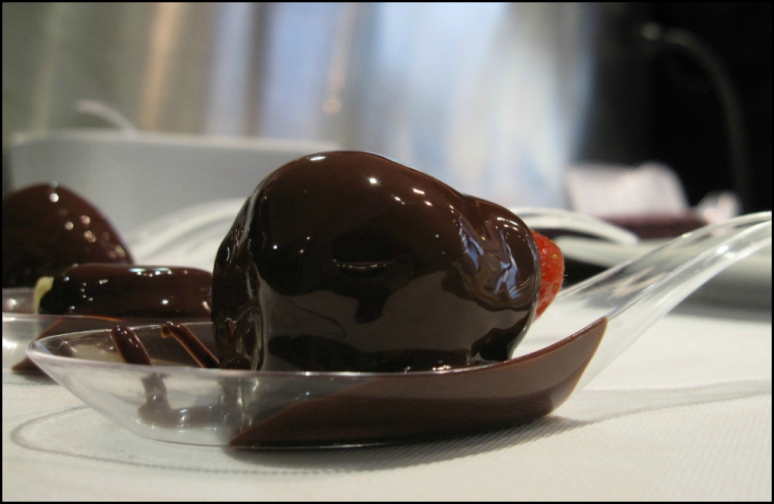 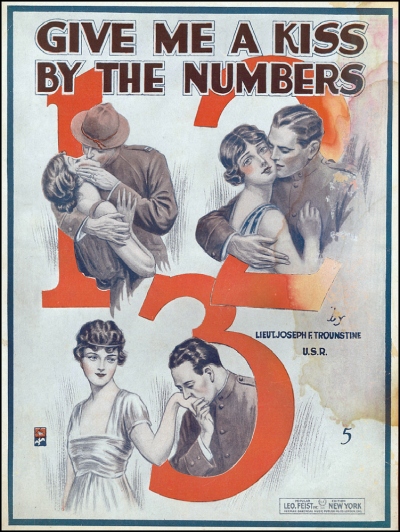 By Lieut. Joseph E. Trounstine Published in 1918 by Leo. Feist

Fully embracing World Book Day and the bittersweet “gallop of remembrance,” this week I’m sharing my growing stash of patriotic sheet music. I’ll also include an excerpt from one of my favorite love letters, by poet and founding surrealist Guillaume Apollinaire to Madeleine Pagès, written in 1915 while he was enlisted with the 38th Regiment of Field Artillery.

Setting the Scene: Living with Gusto

Madeleine Pagès was his muse. A cartridge casing served as his inkwell.

While serving in uniform in Champagne in the Premier Guerre Mondial, Apollinaire showered both his sweethearts and fellow artists with daily dispatches from the front: “Polishing galore, theory more than galore, maneuvers on foot, sabre, musket, revolver, horse management, riding, gymnastics, and a reasoned, practical and thorough study of the 75, which is a beautiful weapon, as beautiful, strong and sweet, I think, as one of my poems.”

Oh, say can you see?

Often by moonlight the prolific poet penned his calligrammes and signature “fireworks in steel.” Way ahead of the Dada hairpin curve, Apollinaire’s sensuous, erotically charged poèmes simultanés are still almighty hot to the touch, just bursting with joyous desire. I am in awe of his composure to compose his burning lines of verse while under actual fire, again and again. 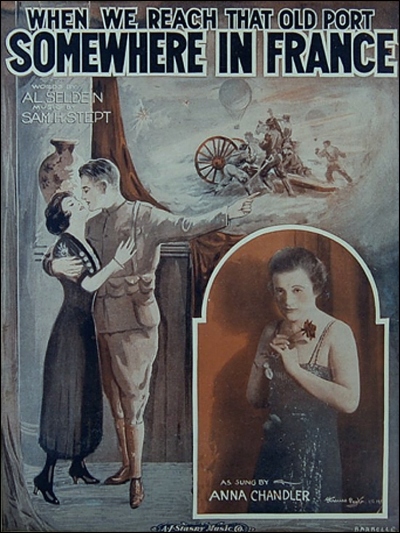 You can almost feel the loud boom of cognitive collision in his free-form associations. Here’s a snippet from his poem, “Flare”:

Juggling and juxtaposing perceptions with memories, he transforms the battlefield horrors surrounding him into knockout surreal beauties that still crackle and stop this Jolie Rousse’s heart.

Apollinaire also had a softer side. In September 1915, he hunkered in the trenches to send his thoughts to his dearest Madeleine:

The contents of the parcels were exquisite. First of all I ate the fruit, the chocolate, and the honey bonbon still bearing the divine traces of your teeth, and this marvelous kind of kiss of your invention proved to me once and for all that you are a true Vendéenne. 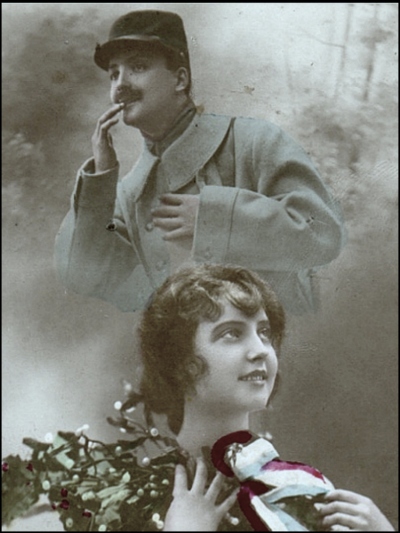 Your memory is the searchlight focusing the night for us-—Apollinaire

I was thrown into near spasms of voluptuousness by this kiss of such a new sort, so subtle, so delicate, so exquisite in its savagery, so Madeleine. I do adore you, you know. I could never have thought up such a thing or imagined such a perfect form of communication from afar between two lovers.

Your dear mouth, your tongue, your teeth, your delicious saliva—all mine your absence notwithstanding, my Madeleine, dearest peerless mistress! And to think that I was almost forgetting to thank you. I am well and truly obliged to you my dearest little wife.

Now that was a letter, from back when even an ordinary poilu still knew how to warm a girl’s heart! I thank Donald Nicholson-Smith for the translation. His Letters to Madeleine (edited by Laurence Campa) is a page-turner on fire.

And one for the road: How about this for an epitaph?

Two flares
Rose explosion
Like two breasts unbound
Raising their nipples insolently
HE KNEW HOW TO LOVE
—from “Festival,” 1915

As Edith Piaf so memorably put it: “Non, je ne regrette rien. Avec mes souvenirs, j’ai allumé le feu.” And she’s right, you know. Regrets are a waste of time. Better to rekindle the fire with all those memories.

Tip: Do you also have a mad penchant for collecting vintage music sheets? Join the paper-pushing club. I’ve got a new contact. Grab a ballpoint pen.

Based in Virginia, John Whiting has been wheeling and dealing in ephemera for nearly forty years. The former history professor not only has an extensive collection of patriotic music sheets from WWI and WWII, but he also stocks old magazines like McCall’s, Ladies Home Journal, Elle, and Cosmopolitan—just to name a few.

Plus, he ships worldwide. Why, it’s a retro-rocking win-grin. Looking for a specific item? Drop him a line at j.whiting1@verizon.net  (Whiting’s Old Paper, Antique Village, Virginia, USA) 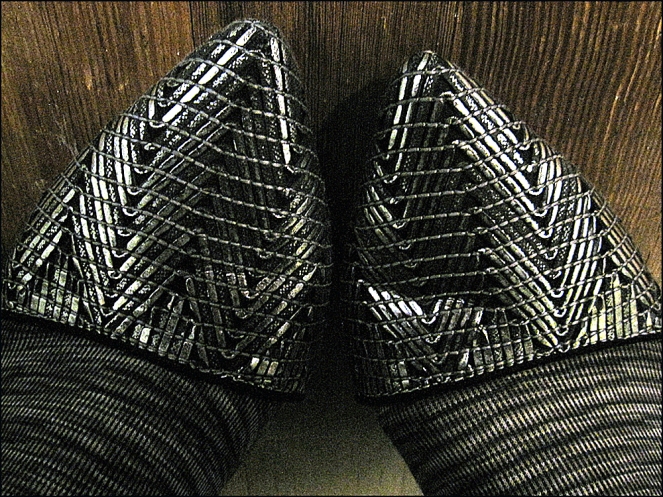 “There isn’t anything in the world that will raise a soldier’s spirits like a good, catchy marching tune,” wrote the music publisher Leo Feist. 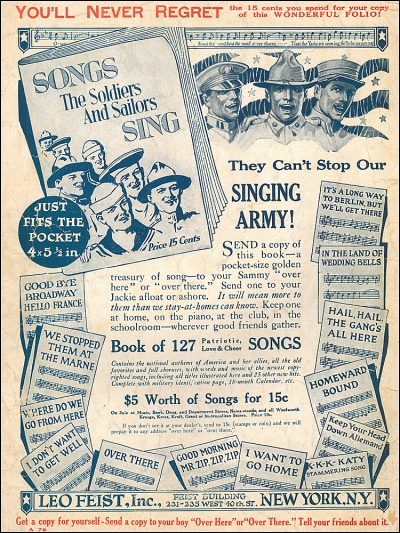 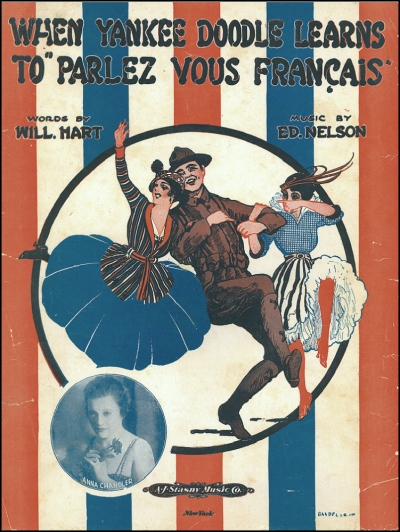 Words by Will. Hart and Music by Ed. Nelson Published in 1917 by A. J. Stasny Music Co. Illustrated by Albert W. Barbelle (T. Brack’s archives) 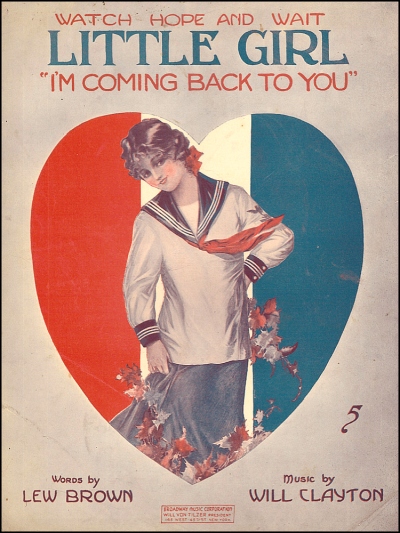 Words by Lew Brown and Music by Will Clayton Published in 1918 by Broadway Music Corporation (T. Brack’s archives) 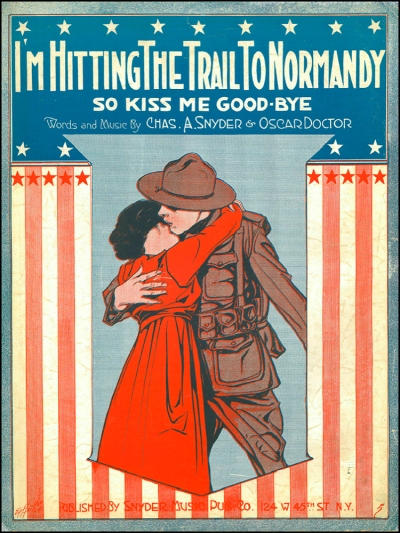 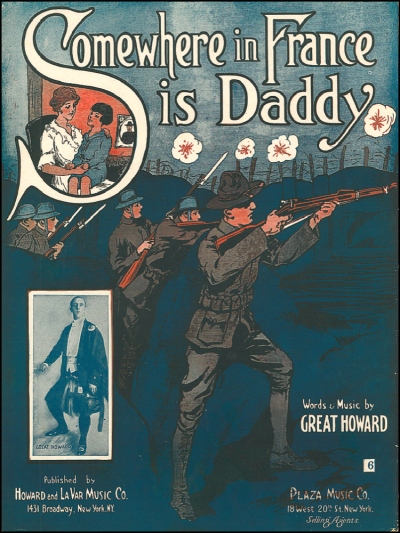 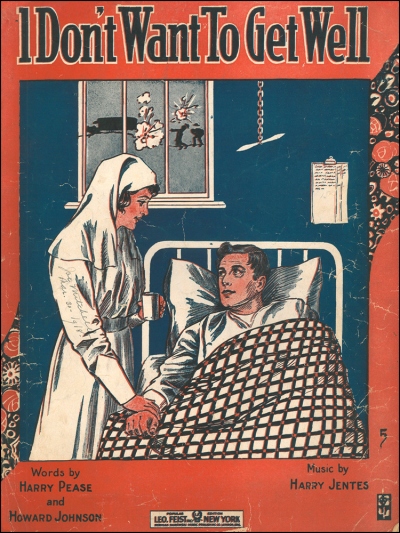 Words by Howard Johnson and Harry Pease and Music by Harry Jentes Published in 1917 by Leo Feist Inc. Illustrated by Starmer and Starmer (T. Brack’s archives) 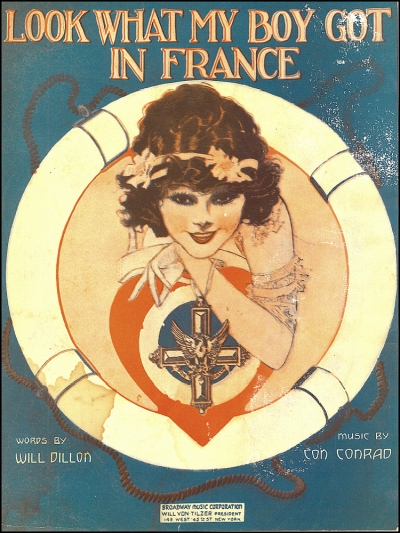 Words by Will Dillon and Music by Con Conrad Published in 1918 by Broadway Music (T. Brack’s archives) 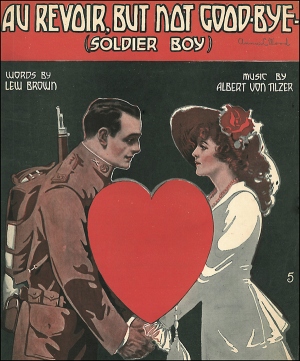 50 thoughts on “Paris: A Sentimental Journey”