Gather around, my fellow aquatic history bugs. I’ve got a tale to tell.

After measuring 10,000 women, one Dr. Dudley Sargent announced in 1908 that he had discovered the “perfect specimen of womanhood.” To a T, swimming champ Annette Kellerman possessed the proportions of the Venus de Milo.

“Her measurements almost surpass belief!” he exclaimed, while parading “Neptune’s daughter” past an all-male audience at Harvard. Go figure!

Soon women all over the world began sending their measurements and sepia-toned portraits to local newspapers and competitions, claiming to have proportions even closer to the classical ideal than Kellerman’s.

Because haters are going hate

At least one woman tried put the global rivalry to rest. ‘Though I have very nearly the measurements of Venus de Milo,” she wrote, “I am not at all glad of this. We are living in the 20th century and not the times of Praxiteles. The features of Venus de Milo are not at all those of the perfect beauty. Beauty changes with the centuries.” Ouch.

But she was undoubtedly right. Venus stands 6’7’ and weighs more than a ton!

I, for one, however, think the Venus still looks absolutely fabulous. So grab your black pumps and handbags. In celebration of the upcoming Global Love Day, let’s hotfoot it on over to the Louvre, and spend some face time with the statuesque beauty. Meet me at the Palais Royal-Musée du Louvre Métro Station. And mind the gap!

I’ve got new images, along with a few taken by our own special photographer friend, Maurice Sapiro. While playing the trumpet with the 279th Army Band in Europe in 1956, Maurice documented the streets of France. I’ve said it once, and I’ll say it again. His photographs still crackle, snap and pop.

After I got him on the horn, he set the scene:

“I was lucky enough to be in Europe before the tourist craze. In 1956, I had the Louvre almost to myself. The people that appear in my photo of Venus were the only people in the gallery. It’s a memory so strong, it seems like it was just yesterday, not 60 years ago. At the Louvre, I decided that painting and photography would be a major part of the rest of my life. Even then, I knew nothing in the future could compare with Paris.”

Now, without further adieu, let’s play forward with some homage, shall we?

First, let’s jump in Mr. Peabody’s WABAC Machine and dial ourselves back to the 18th century.

The Greek revival style has already captured Europe’s fancy, especially in France. Classical Greek styling dominates music, architecture, art, and fashion. Illustrated travelogues are being snatched up and bought as quickly as they are written. Globe trekkers and fashion enthusiasts of the day are getting their classical fixes in salons and museums, and for the first time ever, art institutions are attracting visitors from all walks of life.

Globe trekkers are still getting their classical fixes at the Louvre (Image: T. Brack’s archives, 1961)

But like the ceremonies at today’s Olympic Games, back then every successful museum had to have classical showstoppers to attract the biggest crowds. Although Napoleon hadn’t started off as a hot lover of art, he’d come to consider it a big part of his role as conqueror to “collect” the best from every country he dominated. In fact, Louvre director Dominique-Vivant Denon often joined him in newly acquired territories, sometimes even scooping up masterpieces amidst the smoking ruins while the battles were still taking place. Imagine if eBay had existed back then.

Then came Waterloo, and we all know what that meant. France’s empire went into a tailspin, and her enemies reclaimed more than five thousand stolen works, including the prized Venus de Medici—until then, the toast of the town. “We are still rich,” insisted Louis XVIII in 1816, but that didn’t change the fact that neither his museum nor the nation of France owned a real Venus to call their own any longer—or even a real classical Greek sculpture. 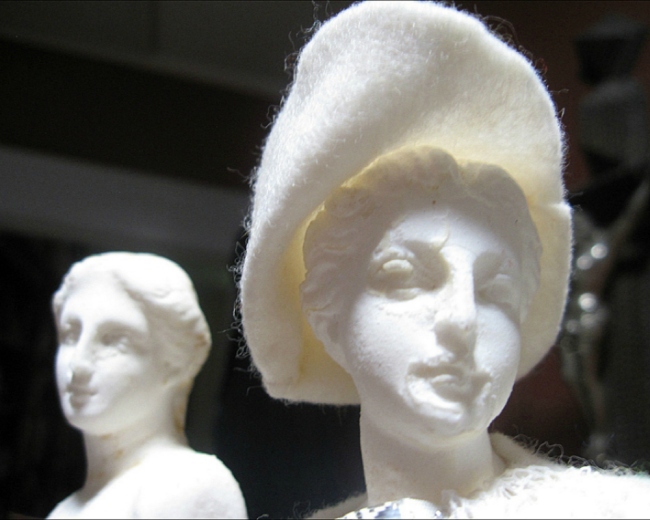 Enter Venus de Milo in 1821, like a divine answer to a prayer (Photograph by T. Brack)

Enter Venus de Milo in 1821, like a divine answer to a prayer. Lost for thousands of years in the underground world of the island of Melos before a local farmer and a French naval officer rediscovered her, she was excavated from deep in the ruins of an ancient Greek gymnasium.

“It really is a very fine masterpiece,” said the enamored king upon her arrival in France. Gazing up at her from his divan-on-wheels, he then issued a royal decree. “The place for it is the Museum of the Louvre. See to it that it is put there immediately!”

That’s right, Johnny Castle. No one puts Venus in a corner! (Photograph by T. Brack)

The Venus de Milo (also known in some circles as the “Aphrodite of Melos”) showed up at the Musée du Louvre in the dead of winter, dirt stained and scarred from when her original niche had collapsed some two millennia earlier. Her nose was broken, a chunk of her wavy chignon hair bun was missing. According to some stories, she had been found with arms, but these went missing during a scuffle that erupted when they were loading the boat to bring her to France.

No matter. After all, what use would the Goddess of Love have for arms? She still had her nose, which is a lot more than you can say about most other antique marbles. And what a nose it is! After a thorough cleaning and a hip and foot restoration, she made her debut before the king and world as the epitome of classical Greek beauty. “Venus de Milo’s nose is a joy forever,” one smitten reporter wrote in 1901. That’s right, Johnny. Nobody puts Venus in a corner!

“I’m a little bit this and a little bit that,” she might have said to her puzzled curators. Her perfectly proportioned head and upper torso—hallmarks of Classical Greece—didn’t jive with the sweep of her stomach or the weight of her heavily draped hips. Those were purely Hellenistic. Hips don’t lie! That’s for sure.

By now, of course, Hellenistic art is no longer considered substandard, and the truth about Venus’s background is out. Despite restoration work and occasional temporary moves due to wars or gallery repairs, her popularity has kept on growing. 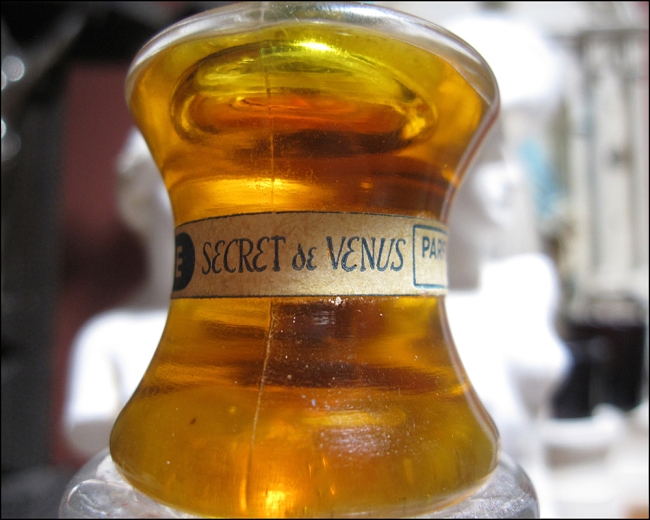 By the late 19th century, souvenir postcards of the armless ancient siren were already out-selling those of all the living stage actresses combined. Thousands of replicas made of marble, plaster, plastic, and terra cotta were mass-produced at a conveyor belt-breaking rate and sold, collected and coveted all over the world.

During WWII, while a stand-in plaster lookalike sensibly took her place at the museum, Venus took shelter in several chateaux almost 200 km away in the Loire Valley. In June 1945, Venus—along with her power gal squad, the Mona Lisa and the Winged Victory of Samothrace—returned safely to Paris. There wasn’t a dry eye in the wings. I’m sure of it.

Venus is still the belle of the hall at the Louvre. She receives some eight million visitors a year—or 7,000,988, if you subtract my monthly pilgrimages.

Auguste Rodin 1912 tribute applies equally well today: “You are not a vain and sterile statue, the image of some unreal goddess of the Empyrean. You are a woman, and that is your glory.” Couldn’t have said it better myself.

Thanks for sharing your memories and photographs, Maurice! 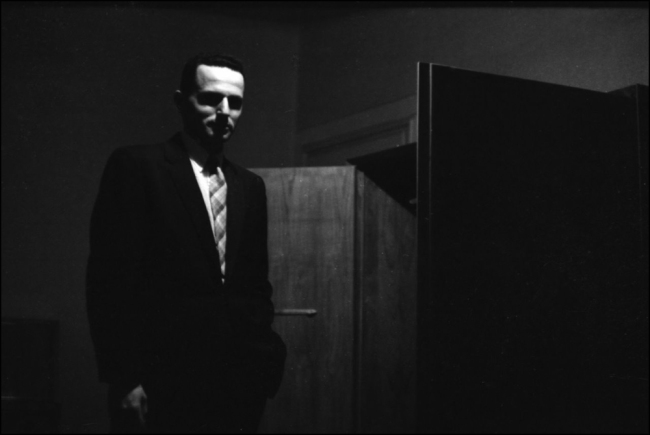 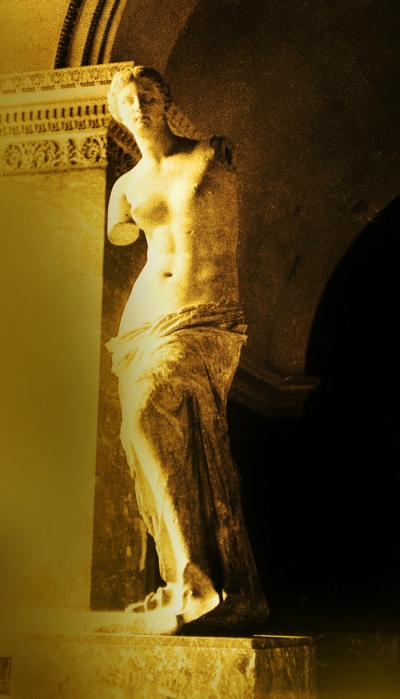 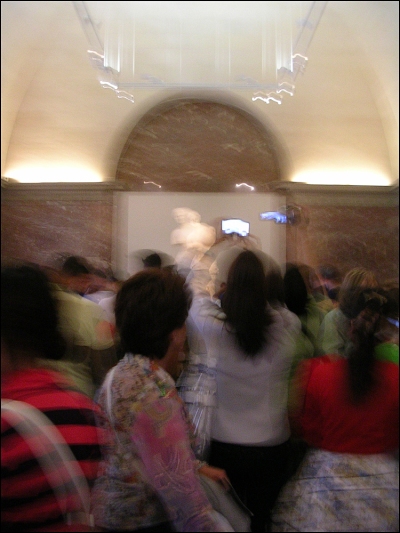 Venus Paparazzi at the Louvre (Photograph by T. Brack) 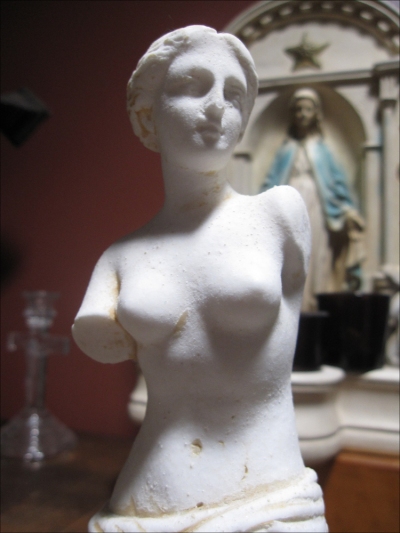 Ready for her close-up: Venus (Photograph by T. Brack)

59 thoughts on “Paris: Tête-à-Tête with Venus and Photographer Maurice Sapiro”