This week, I’d like to introduce you to one of my heroes: suffragette and writer Louise Weiss.

So grab your bicycle and helmet, and let’s get to pedal pushing up the Montmartre slopes to Abbesses—Louise’s old “fight for the right to vote” stomping ground. It’s time to pay homage.

Traffic is heavy, but don’t fret yet. The autumn sun is still on our side of the rue.

As we round the butte, we spot the spot, close by Vincent Van Gogh’s former digs (at 54 rue Lepic). At the school just around the corner is where publicity maven Louise instigated one of her famously stormy powder puff battles.

Let’s prop our bikes up against the lamppost, and try to imagine the scene.

A story I tell often

Louise had organized a “straw vote on the woman’s suffrage issue outside of schools and city halls where men were voting for men, in solemn masculinity. As ballot boxes, hatboxes were being appropriately used,” according to a 1935 newspaper report.

“But the police would not allow these unofficial ballot boxes. Thirty-six of them had been organized all over Abbesses, and one by one they were put out of action. Weiss refused to surrender. With a table, hatbox, and surrounded by a joyous crowd, she continued to urge electors to vote for votes for women.”

Thanks to the efforts of Louise and countless other activists like her, French women eventually got the vote in 1945, Hippodrome de Longchamp, Bois de Boulogne (Image: Bibliothèque Nationale de France)

Because haters are going to be haters

Of course, it didn’t take long for the policemen to reappear. After seizing the hatbox, “the face powder went into action.” Armed with beaucoup boxes of rose-scented talcum, the women waited for a cue from Louise.

She was the first to blow, and then the others followed suit. Clouds of talcum settled on the officers’ uniforms. Arrests were made but so were headlines and legends, too.

By the end of the day, 16,000 votes had been cast in favor of women’s right to vote. Times were changing. See, men cast half the “hatbox” ballots.

Thanks to the efforts of Louise and countless other activists like her, French women eventually got the vote in 1945.

One more tale of tenacity

By the 1890s, thanks to the introduction of the Starley Rover Safety Bicycle and its pneumatic tires, “all Paris was a-wheel,” and the women were not only zipping around in public but also unblushingly flaunting menswear or “something alarmingly like it.”

One rebel stirred by the bike boom was Marie Marvingt. In 1908, she attempted to register for the Tour de France bicycle race. “Impossible!” the officials told her. After all, she was a lady. But Marie persisted, defiantly cycling each stage of the race incognito and becoming the première femme to complete the grueling two-week competition. 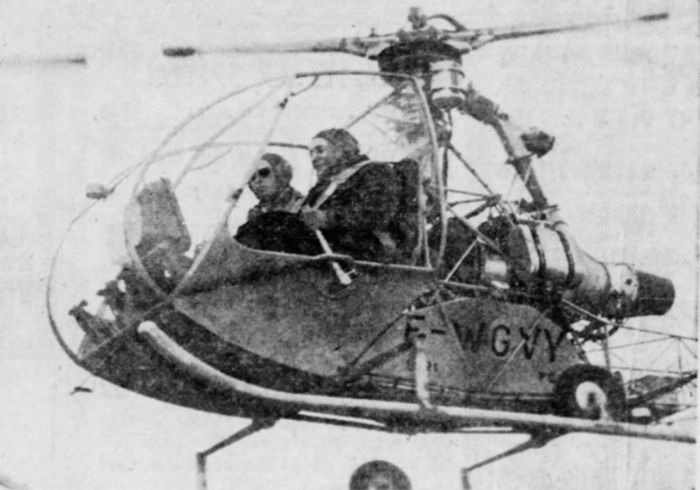 Marie at the joystick: Heroes don’t always wear capes. Sometimes they rock the world with powder boxes, bikes, and helicopters, instead (Newspaper Clipping,1955)

Ahead of the curve

Marie was  a balloonist, mountain climber, sharpshooter, skater, skier, fencer, writer, and aviator. During the Premier Guerre Mondial (World War I), she worked as a Red Cross surgical nurse in field hospitals at the front. She also fought in the trenches disguised as a man, and flew in combat rescue missions.

Never applying the breaks: after learning how to fly a new-fangled-at-the-time Djinn jet helicopter in 1955, our daredevil later told reporters, “I’m eighty. So what?”

Congratulations to the 122 women elected last week to serve in the 116th United States Congress, bumping the percentage of women representatives in Washington D.C. from 20 to 23 percent.

We can do it. As Marie Marvingt liked to say, “It’s so delicious to fly like a bird!”