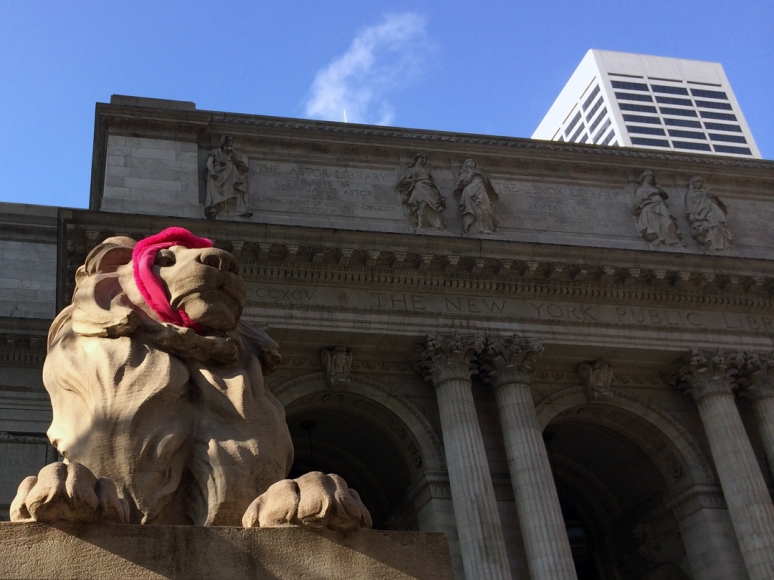 Let’s celebrate friendship at the New York Public Library with my favorite lions: Fortitude and Patience, sculpted by Edward Clark Potter and the Piccirilli Brothers, 1911 (Photo by Theadora Brack)

If you’ve got a weekend to spend in the Big Apple during the winter season, I highly recommend exploring the department stores along Fifth Avenue. As your sequined shoes make a brand new start of it, straight through the heart of it, don’t fight the feeling. This still gussied-up stroll will ignite your fire, especially after a cup of Li-Lac’s hot coco. Open since 1923, the Brooklyn-based chocolate factory just opened a new flagship in the West Village. Making no beans about it, it was love at first sip. 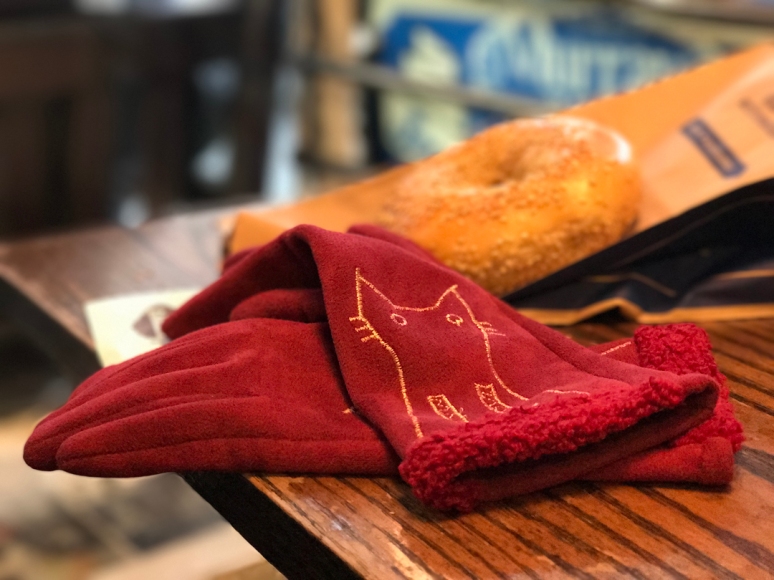 Nothing quite like it: I also love the aroma of a hand-rolled, kettle-boiled sesame seed bagel, Murray’s Bagels, Greenwich Village (Photo by Theadora Brack)

I’ve been walking the New York streets since the age of eight. I love the days when nothing gets between your blood and the city’s cacophony. The noise of honking cars. The sound of high heels click-clacking. The squeal of taxi brakes. The ringing of church bells. I’ll take it all. Especially the aroma of street food: falafel, french fries, pretzels, and hotdogs. I don’t even like hot dogs, but you haven’t really lived until you’ve feasted on one from a cart parked outside the Met on a frigid day in January. With relish, please.

Here’s how Anaïs Nin described New York City to Henry Miller during the 1930s: “I love the proportions, the amplitude, the brilliance, the polish, the solidity. I look up at Radio City insolently and love it. The newness. The vitality. Just bring your own contents, and you create a sparkle at the highest power.” 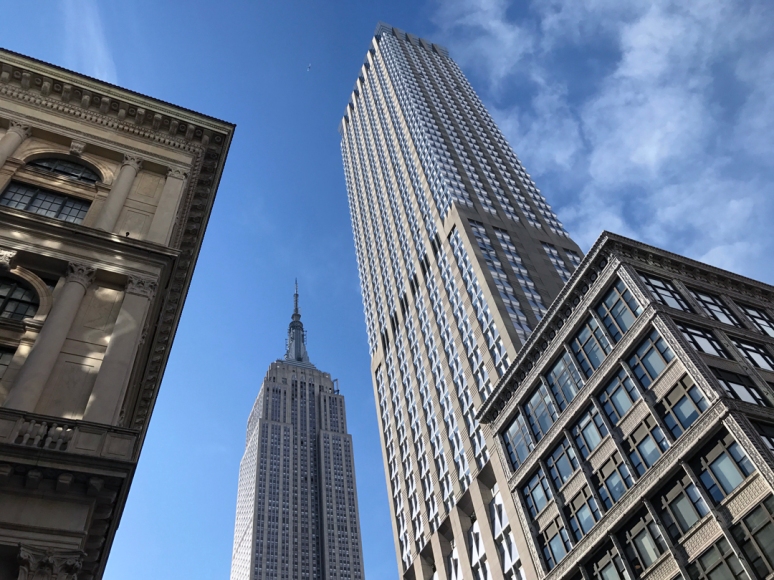 Gaze up at the Empire State Building, but before crossing, do look both ways or else you, too, will have a star-crossed affair to remember! (Photo by Theadora Brack)

Let’s launch our window-shopping outside Macy’s at Herald Square. After we’ve admired the vitrines, we’ll gaze up at the nearby Empire State Building, the closest thing to heaven in this city. It’s still true. However, before crossing, do look both ways or else you, too, will have a star-crossed affair to remember! Besides, Cary Grant and Deborah Kerr left the building years ago. 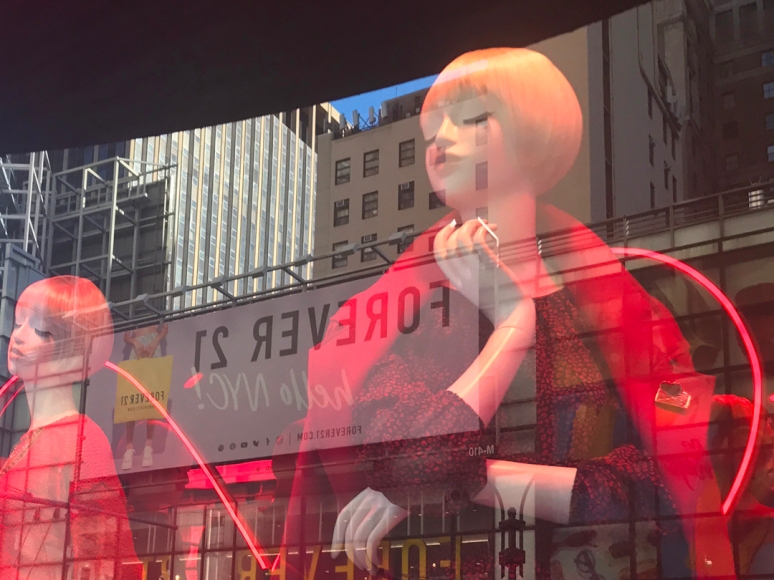 Hurtling into the beauty spotlight: Let’s launch our window-shopping outside Macy’s at Herald Square. (Photo by Theadora Brack)

Rowland Hussey Macy’s “World’s Largest Store” has been shining at Herald Square since 1902. Are you curious about the store’s “star” logo? It’s a salute to the tattoo that Macy got when he worked as a teen on a Nantucket whaling ship in the 1830s. Perhaps R.H. had Moby Dick in mind when he created his first whale of a sale?

Here’s how Macy’s wooed Francophiles in the newspapers during the 1950s:

“Walk into Paris through Macy’s windows! We’ve removed the glass. We’ve reproduced a Paris boulevard right down to the last kiosk! See the fashion accessories that Macy’s stylists spent weeks abroad collecting. Macy’s copies of handbags, scarfs, belts, gloves, and umbrellas are twin to the French in everything but price.”

Tip: Don’t miss the original Otis L-type escalators, located smack dab in the middle of the revamped fragrance hub. The escalators with the wooden treads run between the 8th and 9th floors. Going down? Hold onto the railing because it’s a bumpy ride, but worth every click-clack and jiggle. #Nevergetsold 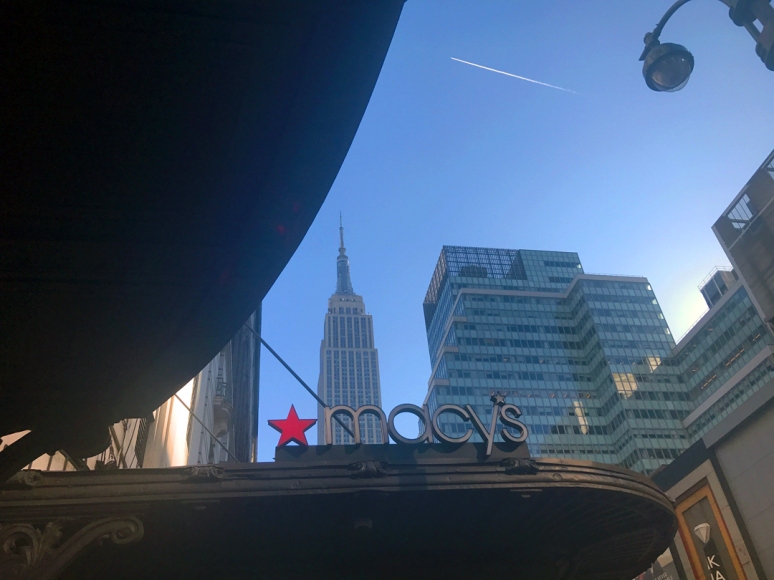 Curious about the store’s “star” logo? It’s a salute to the tattoo that Macy got when he worked on a Nantucket whaling ship in the 1830s. (Photo by Theadora Brack) 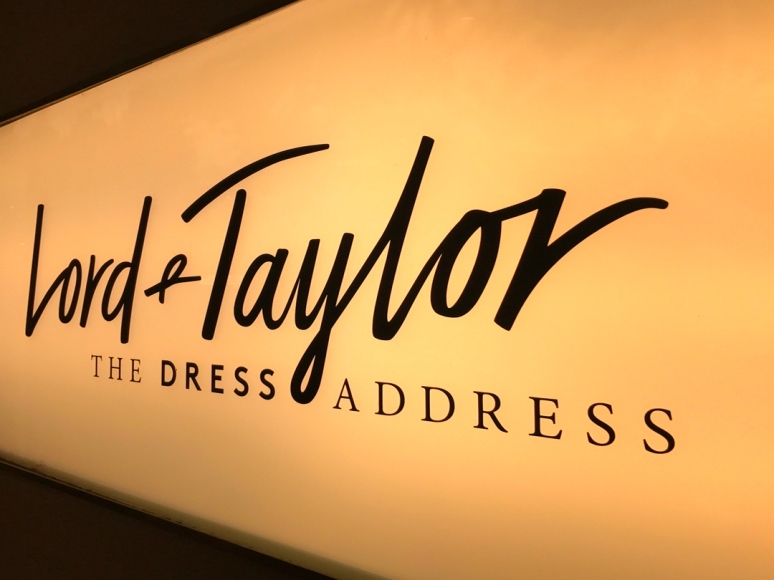 In January 2019, Lord & Taylor’s Fifth Avenue flagship closed its doors. I’ll admit it—I got weepy looking up at its once majestic façade. (Photo by Theadora Brack)

Sadly, in January 2019, Lord & Taylor’s Fifth Avenue flagship closed its doors. The banners and signs were removed, along with nearly every brass-plated ornament. I’ll admit it—I got weepy looking up at its once majestic façade. See, here at “The Dress Address” is where I spent many a lunch break, trying on perfume after perfume—often during the same browse—much to the chagrin of the patient sales associates, I’m sure. 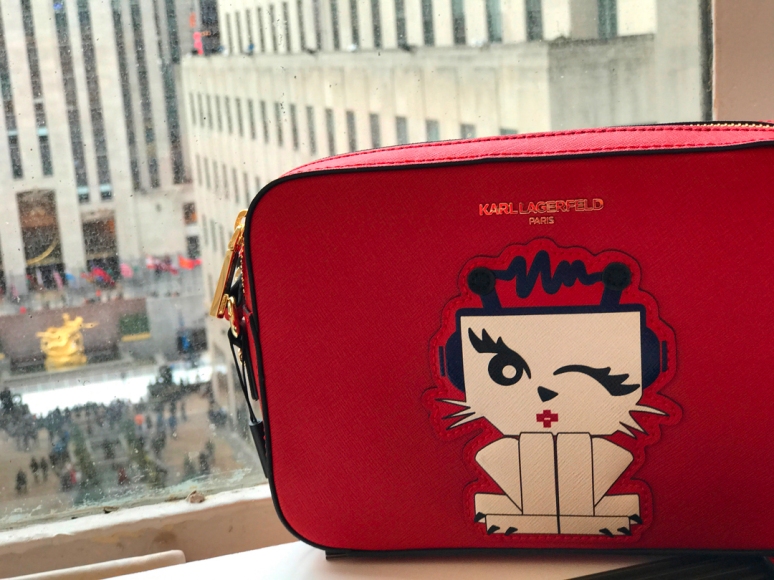 Here’s a photo of my final purchase at Lord & Taylor: A red cat bag by Karl Lagerfeld. RIP, Lord & Taylor and Monsieur Lagerfeld, too. (Photo by Theadora Brack) 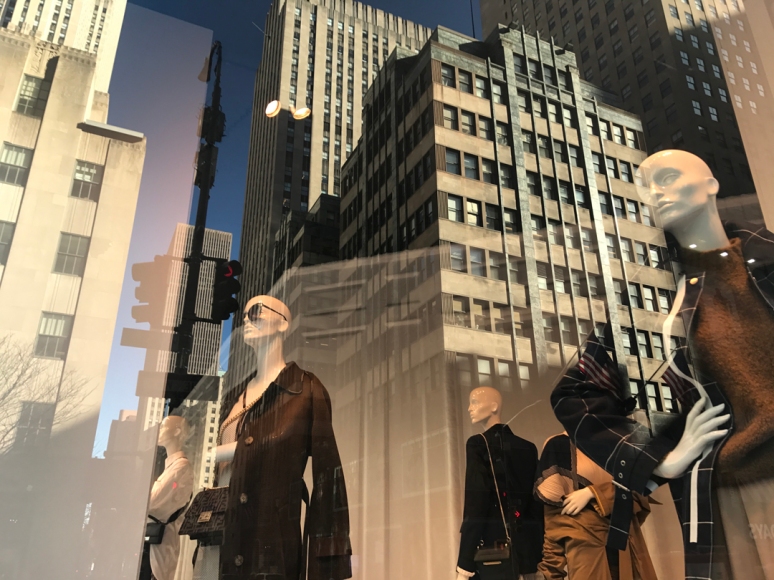 Never a thumping bore: The year of the grand opening at Saks was 1924, to every flapper’s delight, I’m certain. (Photo by Theadora Brack)

Now, let’s power-push it up to Saks. Look at the flags in the distance. The year of the grand opening was 1924, to every flapper’s delight, I’m certain. Setting the scene: At the crack of dawn on Monday, September 15 that year, hundreds of sightseers appeared, including boxer Jack Dempsey.

“Rush of shoppers opens Saks Store.” “Crowds so large even stenographers are pressed into service as Saleswomen.” “First package to President Coolidge!” “False report that Prince of Wales is there causes stampede of women to men’s department.” Such were the zippy headlines in that day’s The New York Times. 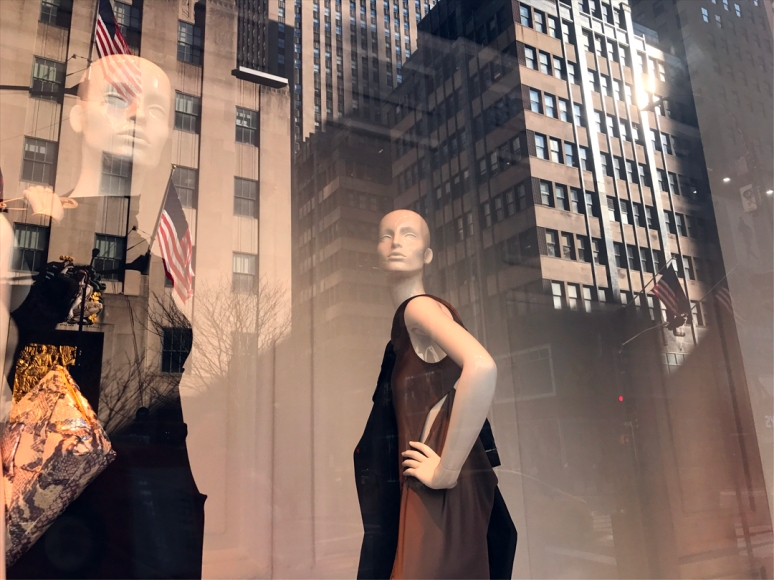 Saks, Study how the vitrines mesh with the reflections of the surrounding cityscape. Providing seamless backgrounds, the trees and skyscrapers play nicely with the mannequins. (Photo by Theadora Brack)

Diamond-shaped escalators, that’s what’s new, and shiny, too. Designed by Rem Koolhaas, the dichroic film-coated escalators not only twinkle, but also throw flashes of color on the white walls and columns as you ride between the renovated floors. Inspired by the launch of the escalator at the Exposition Universelle 1900, Koolhaas wants to bring back the thrill with a pimped-up moving staircase ride.

Well, I certainly felt the “groovitational” rush and pulled up to the beauty department, now located on the second floor. No shock to you, I’m certain. 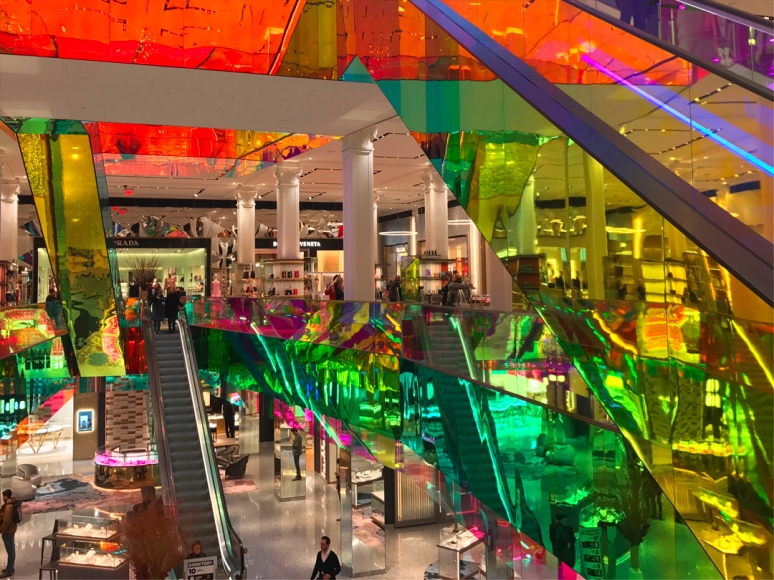 Designed by Rem Koolhaas, the new dichroic film-coated escalators at Saks not only twinkle, but also throw flashes of color on the white walls and columns. (Photo by Theadora Brack) 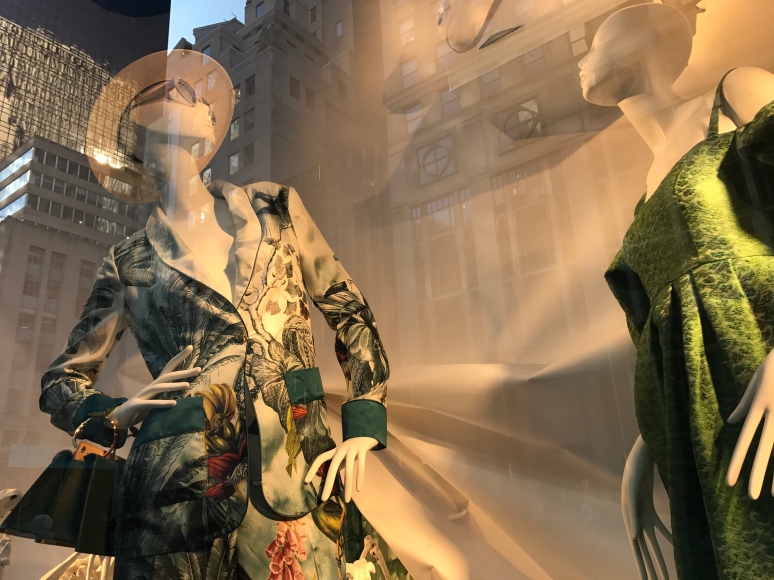 Fool-for-fanciful: I could almost hear the Breakfast at Tiffany’s soundtrack softly a-do-doing as I exited Bergdorf Goodman. (Photo by Theadora Brack)

Herman Bergdorf and Edwin Goodman’s flagship moved on up to 54th Street in 1928. Overlooking Central Park and the Grand Army Plaza, the view is a stunner when the Callery pear trees are in bloom (even if they’re a bit smelly). Also, keep your eyes peeled for the Plaza Hotel, located next to Bergdorf. The Way We Were is just one of many movies to feature this hotel. 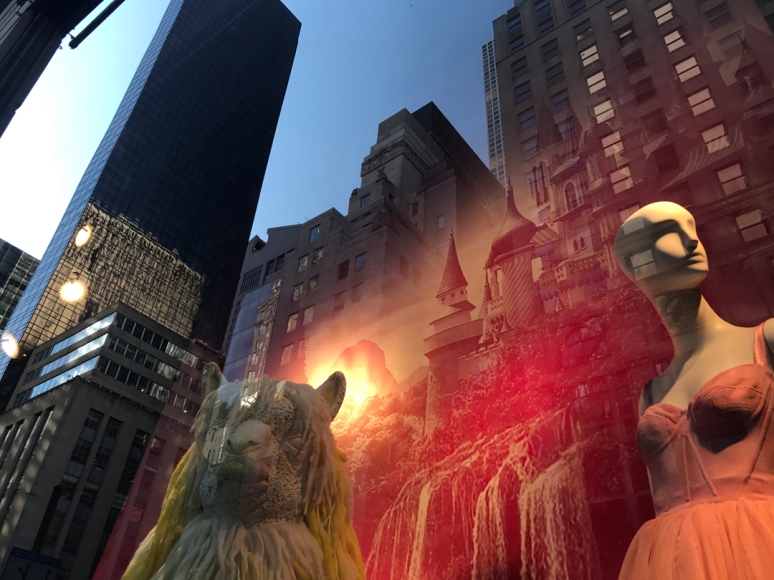 According to the Bergdorf Goodman designer Sam Theis, the current installation gives props to props: Showcasing the collections with “surrealism, comedy, and color.”(Photo by Theadora Brack)

Tip: Last year, for the first time ever, I explored the entire department store. I had a ball as I rolled through each and every tiny showroom like a high roller. On the 7th floor, I discovered an exhibition featuring gems from Berdorf’s own archives: Historic photos of the vitrines, advertisements, and sketches by Balenciaga and Dior.

Then, as I flew though the fragrance department, I completely lost my head over the spicy Twilly d’Hermès Eau Poivrée. I sprayed it not only my wrists, but also on the back of my neck—letting the cat out of the bag. Where did I not spray it? I could almost hear Henry Mancini’s Breakfast at Tiffany’s soundtrack softly a-do-doing as I made my exit with a tiny new bottle in hand, glowing and feeling toasty to the core.

As Deborah Kerr said to Cary Grant in An Affair to Remember, “Winter must be cold for those with no warm memories.”

That goes double for chocolate and perfume. 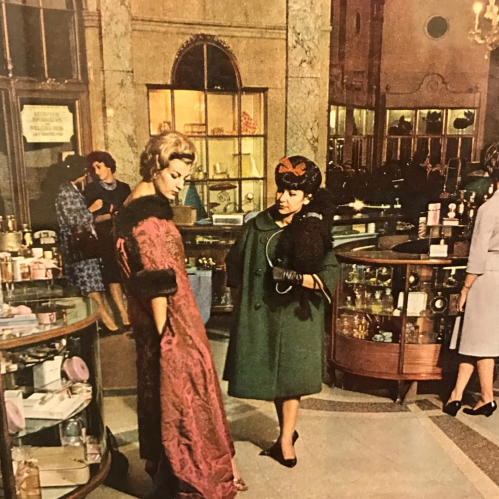