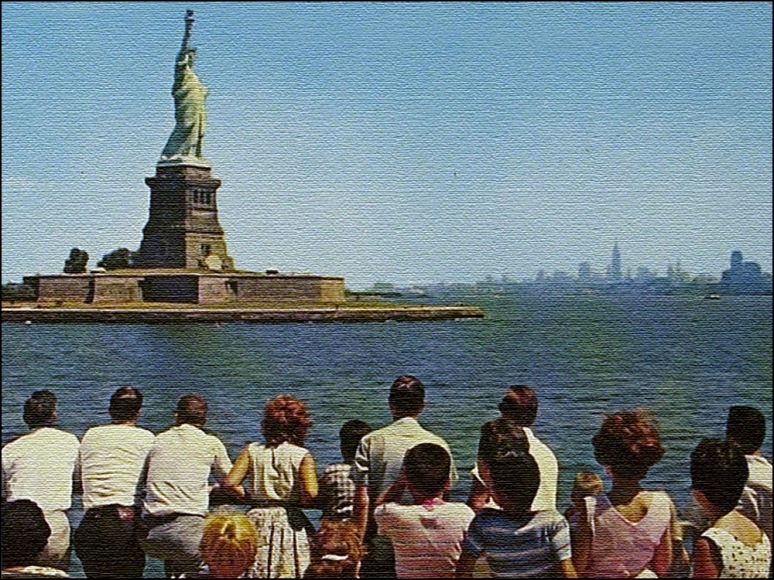 Start spreading the news because we’re leaving today! In celebration of the recent July 14th Bastille Day in France, let’s pay homage to my favorite Franco-American collaboration, the gigantesque statue of Lady Liberty on Bedloe’s Island in the New York Harbor.

Up my sleeve, I’ve got a few new tidbits and photographs, along with one taken by our own special photographer friend, Maurice Sapiro. While playing the trumpet with the 279th Army Band in Europe in 1956, Maurice documented the streets of France. Inspired by the Lumière Autochrome color film process, his shots snap, crackle and pop!

After all these years

Our 151-foot tall iconic darling is still looking fierce in her spiky nimbus (that’s right, mythically speaking it’s not a crown!) and matching, floor length chiton in all its copper green tonalities. An exquisite nod to the style of classical Greece, I must say.

Pinching from the late, great designer, Christian Dior, “Darling, your toile with the cinched waist is perfect!”

Frédéric-Auguste Bartholdi was the artist, while Eugène-Emmanuel Viollet-le-Duc and Alexandre Gustave Eiffel were the structural engineers of the Union Franco-Americaine Statue of Liberty project. (Viollet-le-Duc also helped restore Notre Dame. Contributing his own interpretive gothic revival twist, he upgraded it with a fantastical spire and a bevy of new gargoyles to keep the evil spirits at bay, and then gave it a good cleaning.) Yes, it is a small world.

LADY, I CAN SEE YOUR HALO AT THE MUSÉE DES ARTS ET MÉTIERS, Paris

Monumental statuary has long been financed by public subscriptions (much like today’s Kickstarter funding schemes). The Statue of Liberty was no exception. Fully embracing crowdsourcing, Bartholdi pumped up the publicity volume with some P.T. Barnum-worthy teasers: In 1876 Lady Liberty’s arm and torch shined at the Centennial in Philadelphia, while her head and halo made a photogenic cameo at Paris’s Exposition Universelle of 1878.

With the help of the Paris opera’s theatrical director, Jean-Baptiste Lavastre, Bartholdi also fashioned a portable canvas banner and cranked out miniature replica souvenirs—all boasting Lady Liberty’s image, well before the statue was built. You can never go wrong with swag, I’ve always said. Apparently Bartholdi felt the same way, because in 1876 he applied for and won a design patent for the Statue of Liberty, which further helped him promote, fund, and move the project forward.

A star is born

From the get-go, Bartholdi was involved in every aspect and phase of the project. Cutting a dashing figure with his short beard and pencil-thin mustache, Bartholdi not only ignited but also maintained a global buzz. And how! There was even a “Bartholdi Fan Club.” But he also had timing on his side. During 1800s, colossal monuments were in vogue as a popular way of sharing collective ideas and values (similar to social media walls). 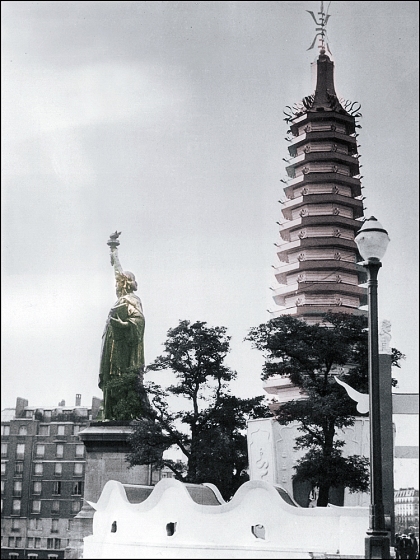 Fast forward: The French paid for the construction of the statue, while the U.S. footed the bill for her pedestal (with a big push from Joseph Pulitzer—all donors got their name listed in his World newspaper, no matter how small their gifts).

Here’s how Bartholdi described his vision: “I have a horror of all frippery in detail in sculpture. The forms and effects of that art should be broad, massive and simple!”

I think Christian Dior would have added his stamp of approval to the Statue of Liberty’s classical attire. After all, he once said, “Elegance must be the right combination of distinction, naturalness, care and simplicity.”

Imagine if Dior had designed a stunning little “New Look” number for our Top Model Liberty friend. Perhaps a dress with a plastron curving down below the waist, side drapery, and a faux waterproof stole? The mind squeals!

Weighing in at an impressive 450,000 pounds, her height (from heel to head) is 111 feet, one inch, her waist is 35 feet, the length of her right arm is 42 feet, the length of her hand is 16 and a half feet, her fingernails are 13 inches (no nail biter here!), her head from chin to cranium is just over 17 feet, while her nose is more than four feet long and her mouth is three feet wide. It’s a good thing big girls don’t cry. 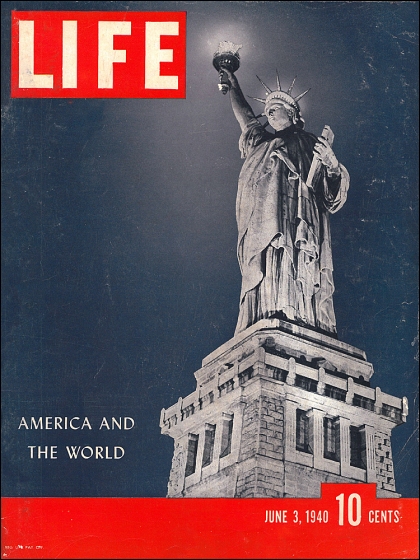 Indeed, Lady Liberty is no lightweight. During the summer of 1885, after taking a special 70-car train from Paris to Rouen, the 300 copper pieces that form her surface were packed in 214 wooden crates. It then took more than a month aboard the French frigate Isère to carry her from France to the New York Harbor.

“You look marvelous,” Mayor William Russell Grace shouted, live from New York! During her 1886 inaugural parade along Broadway from the Battery to City Hall, the financiers in Wall Street were so moved that they started throwing tape out the window, igniting the Big Apple’s eternal love affair with tickertape parades. There wasn’t a dry eye along the “Canyon of Heroes.” I’m sure of it.

Don’t leave Paris without checking out the prototypes of Bartholdi’s La Statue de la Liberté scattered around the city. Grab a pencil! You can find them in a range of sizes near the Pont de Grenelle on the Île des Cygnes (Métro: Bir-Hakeim), in the Jardin du Luxembourg (Métro: Odéon), and at the Musée des Arts et Métiers (Métro: Arts et Métiers).

Tip: You can also find a full-size version of her famous torch at the entrance to the Pont de l’Alma tunnel. Nowadays, the “Flamme de la Liberté” memorial serves double duty as the unofficial Princess Di shrine, since she was killed in the traffic tunnel just below. Pilgrims still leave poems, flowers, and love letters there. And if you’re still hungry for more Libertiana after all this, Bartholdi’s former studio is located at rue de Chazelles in the 17th arrondissement (Métro: Courcelles). Parc Monceau is just around the corner. Look for the plaque!

Prior to the Statue of Liberty’s voyage in 1885, Victor Hugo paid a visit to Bartholdi’s Gaget, Gauthier and Co. workshop. He was moved to remark, “C’est Superbe! Yes, this beautiful work tends to what I have always loved, called: peace. Between America and France—France, which is Europe—this guarantee of peace will remain permanent. It was good that it was done!”

Or in the words of Dior: “A country, a style or an epoch are interesting only for the idea behind them!”

(And thank you, Monsieur Sapiro, for sharing your beautiful photograph!) 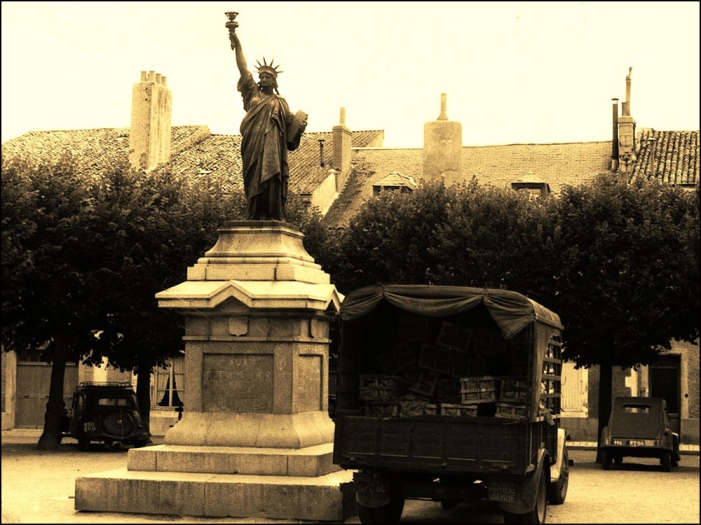 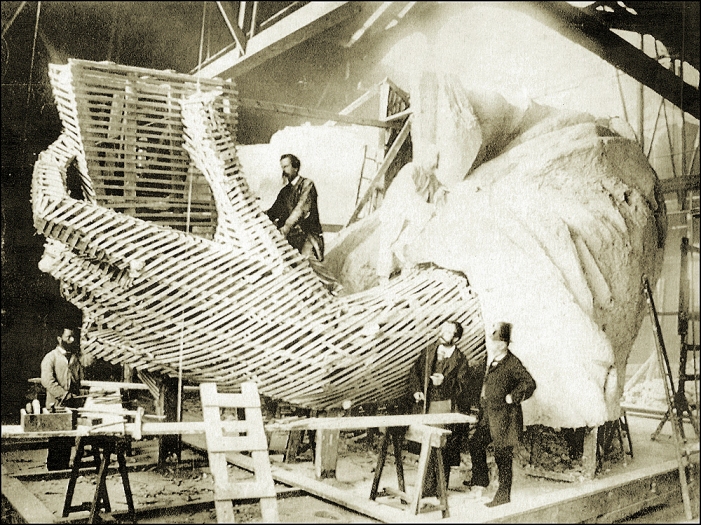 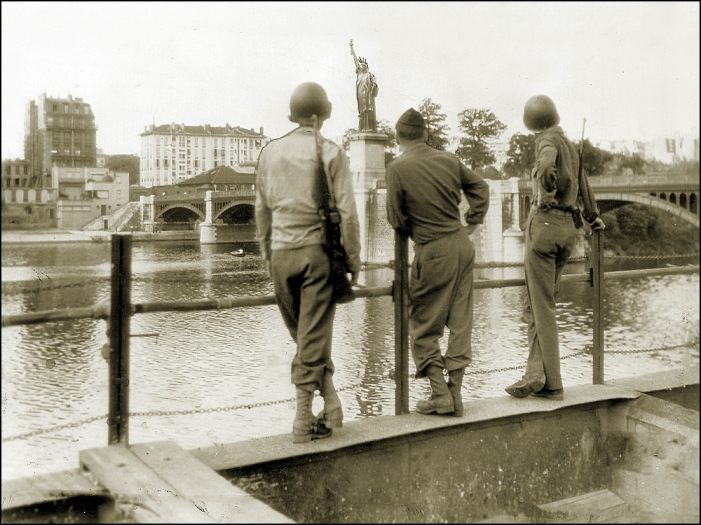 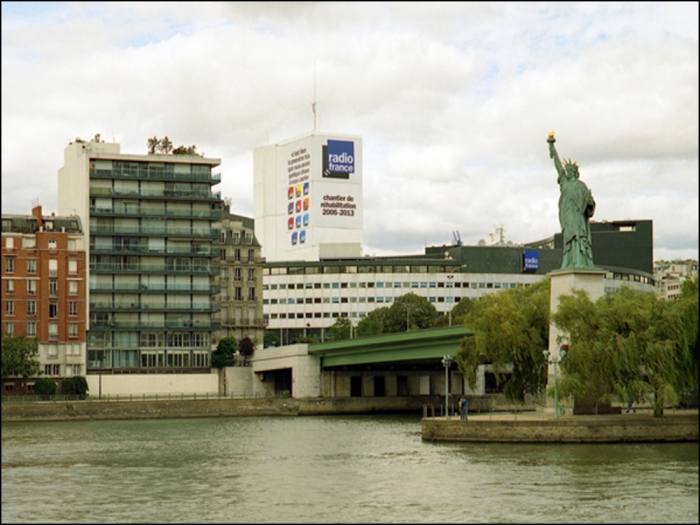 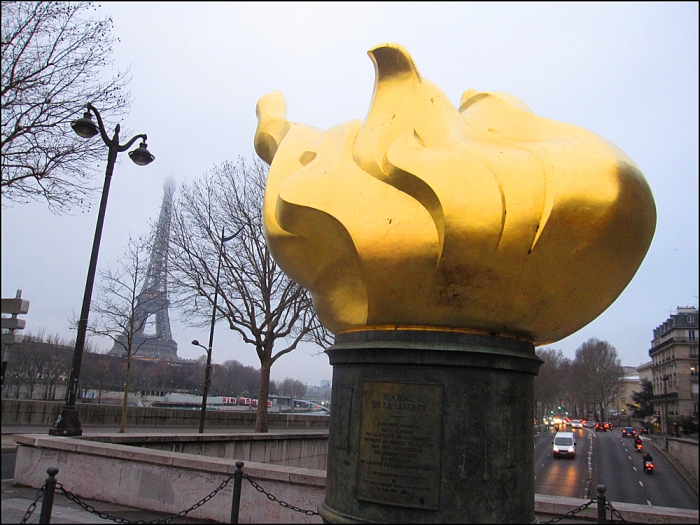 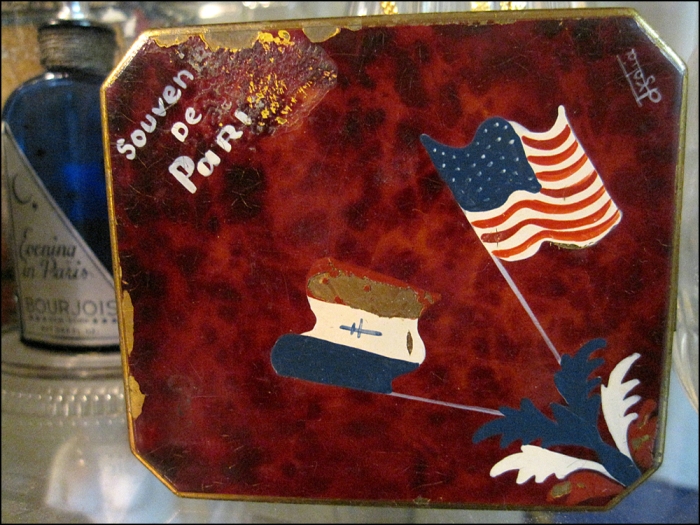 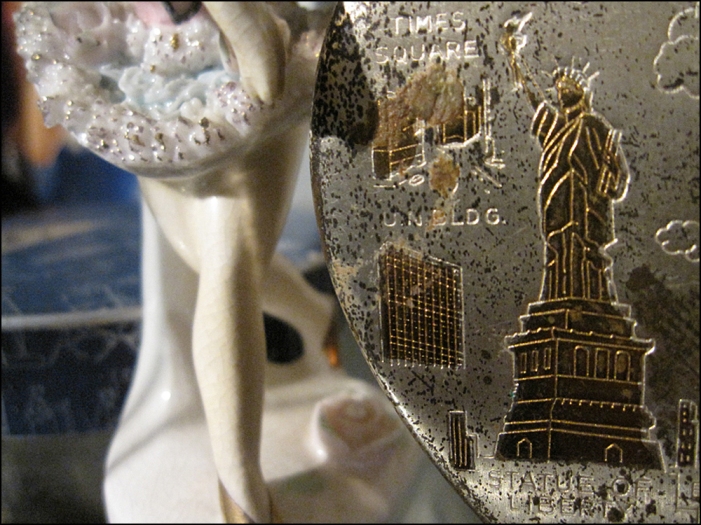 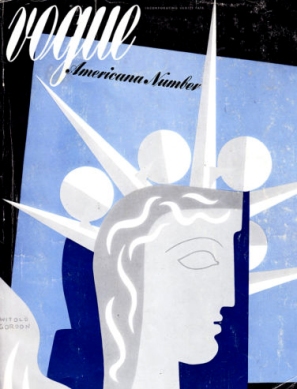